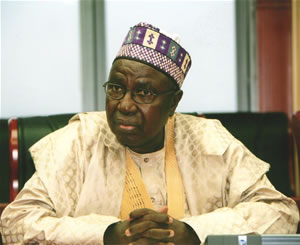 Abuja (Ministry of Foreign Affairs Report) – The Minister of Foreign Affairs, Aminu Wali has called on the international community, especially the United States of America to help in proffering a long term solution for combating the wave of terrorism in Nigeria.

He made this call recently when the United States under-Secretary of State for Civilian Security Democracy and Human Rights, Sarah Seulall paid him a courtesy visit in Abuja. He also said that the Nigerian Government has welcomed the United States willingness to help rescue and bring back the Chibok Secondary School girls abducted in Borno State by Boko Haram. He further noted that the United States has historically been a defender of human rights and has always been in the forefront in the promotion of democracy, peace and security globally.

According to him, there is need for a united front in combating terrorism, since unless terrorism is fought to standstill; it is bound to affect the West African sub-region and ultimately the whole continent. He observed that it took the abduction of the Chibok girls to get the attention of international community to appreciate the magnitude of the challenges, which the Nigerian Government is facing in attempt to curb insurgency. He added that terrorism is a global issue and not restricted to Nigeria.

He solicited for technical support and capacity building for combating the insurgents, whom he accused of trying to truncate Nigeria’s nascent democracy.

While responding to the address, the US Under- Secretary of State noted that the abduction of the young girls in Chibok and  the  response of the global community underscored their commitment as well as reassured the  country the  preparedness to offer assistance to Nigeria.