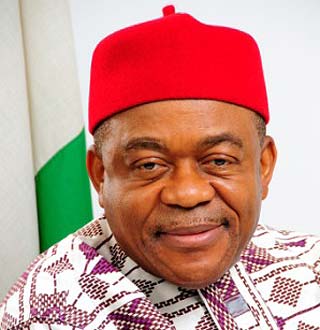 Abia State Governor, Theodore Orji, has said there is no going back on rotation of the governorship seat of the state come 2015, which is based on senatorial districts, irrespective of pockets of opposition against the proposal in some quarters.

Prominent among the notable governorship aspirants outside Abia South, who aspire to succeed Gov. Orji in 2015 against the zoning formula, are the immediate past Chief of Army Staff, Lt.-Gen. Azubuike Ihejirika (retd.), and an oil magnate, Uche Ogah.

But Orji, who insisted on the rotation policy on Tuesday in Umuahia, the state capital while swearing in two new commissioners, and 17 Transition Committee Chairmen for local governments, said it was based on equity and justice.

He described himself as a beneficiary of the system of rotation.

The governor said, “I am a product of rotation. If there was no rotation, I may not be governor today. I must continue with rotation because power moved from Abia North to Central, and must go to South.

“It is incumbent on me because failure to do that will be injustice to myself and my party. Even the President is also a product of rotation. The states around us are also clamouring for rotation. It is fair to both God and man”.

Gov. Orji, however, warned that zoning the exalted office would not amount to imposition of incompetent candidate, insisting that the process of producing his successor must be based strictly on merit.

“Whoever will be governor will naturally come from God. My job is to provide a level playing ground for all contenders”, Orji said.

READ  Nigerian Beggers Should Focus On Begging The Government - Sanusi

The governor added that election into the council administrations in the state would soon be held, declaring that the new Transition Committee Chairmen would be the last set of unelected people to pilot the affairs of councils in the state.

While calling on aspirants interested in council administration to brace up for the exercise, the governor charged the new appointees to shun corruption and greed, warning that he would not hesitate to wield the big stick against anyone found wanting.

“We shall keep watch over you, and if power begins to intoxicate you, we will give you the antidote”, Orji warned, counseling the council bosses to ensure punctuality to office to attend to their people.

The governor also tasked the chairmen on prudent management of their Internally Generated Revenues, saying, “You must tell me how much you generate as IGR and I will tell you what to do with it”.

Domopalooza Welcomes Analytics Expert for NBC News to the Mainstage