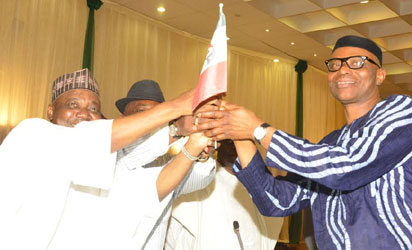 Governor Olusegun Mimiko of Ondo State has been advised by the National Working Committee (NWC) of the Labour Party to respect the party’s constitution and resign from office.

Mimiko, who was elected governor on the platform of the LP, dumped the party for the Peoples Democratic Party (PDP) earlier this month.

The Labour Party NWC took the decision after a meeting in Abuja on Wednesday.

According to a statement issued by the LP National Publicity Secretary, Ikpe Etokudo: “The NWC came to the inevitable conclusion that the constitution of the republic and provision of relevant section of the electoral laws must be respected by Dr. Olusegun Mimiko and his new party – the PDP.

“The case of Dr. Boroffice who was elected as a Senator on the platform of our party but defected to the All Progressives Congress (APC) was cited. The NWC reminded Dr. Mimiko that he was so incensed by Boroffice’s action that he advised the party to approach the court for justice.

“The NWC warned all those concerned to take the path of honour immediately or should expect to defend their deliberate defiling of the constitution of the country within next 21 days in court as well as be ready to face the wrath of workers of Ondo State in particular and the nation in general”.

Manuel Neuer Out For The Season