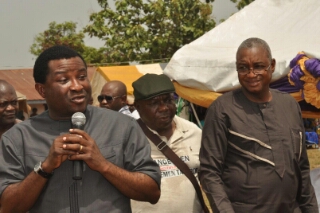 The attack by suspected All Progressive Congress (APC) thugs on the person and campaign train of the Peoples Democratic Party, PDP, governorship candidate, Prince Tarhemen Tarzor, has been condemned in totality by the National Democratic Front.

The NDF described the attack as a barbaric expression of failure by anti-democratic persons, who are still yet to settle down with the norms and ethos of democratic practices in the world.

National President of the group, Comrade Philip Agbese, in a reaction to the unwarranted attempt on the lives of Tarzoor and his supporters after a Church service at Agasha in Guma Local Government Area of the State on Sunday, warned that the ugly incident must be investigated by the security agencies and any individual directly or indirectly involved must be brought to book as the nation can ill afford to conduct its activities like motor touts, who use all manner of tools like guns, charms and cutlasses during their elections.

According to Agbese, the promoters of violence in Benue State and other parts of Nigeria must be reminded that the era of garrison politics is gone and the Nigerian people are now wiser and much more prepared to use their Permanent Voter’s Card to decide candidates of their choice and will not succumb to any amount of intimidation, coercion or use of crude implements to change their minds.

Speaking further, the NDF leader lamented that if President Goodluck Ebele Jonathan could go to Daura, Katsina State, the home town of his major challenger in the presidential elections on Saturday to campaign peacefully, it therefore beats the imagination of every well-meaning Benue son and daughter to think that some persons are too mighty to be challenged in an election.

He stressed that the rules have not changed and will not change and therefore called on the youths to rise up with their PVCs to defend their destinies on election days knowing well that these very elements, “who could not stop God in 2011, have further diminished in character, morality and even financial source to challenge the popular wish of the people after four (4) years.

“This particular news from Agasha, Guma Local Government Area of Benue State is not only sad to the extent of its barabarism but calls for urgent action by the security agencies as some persons have deployed anti-democratic forces to stop the wind of Transformation blowing through the length and breadth of Benue State in particular and Nigeria in general.

“These characters that are yet still yet to grasp the techniques of modern democratic culture like public debate, free expression and movement of persons to sell their manifesto to the electorates are still pretending and living in their old world of touting, ballot snatching and intimidation of voters and have been gripped with a fever of defeat to start throwing physical attack on their opponents.

“To us at the National Democratic Front, this callousness and madness must be stopped immediately by the Police and other security agencies even as we call on Prince Tarzoor to remain resolute in his commitment to our nascent democracy, we are also confident that the electorates would troop out en-masse on election day to vote candidates of their choices irrespective of the present threat and violence which some persons have already substituted for peaceful and intellectual engagements”, the statement also added.

I Am Not Running From EFCC – Obanikoro