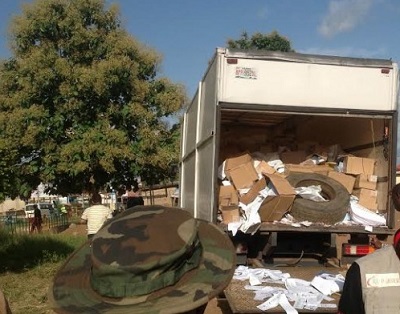 A driver with the Independent National Electoral Commission, INEC, in Delta State got more than he bargained for on Thursday as he was beaten to a pulp for allegedly trying to divert sensitive materials meant for tomorrow’s governorship and house of assembly elections in the state.

The angry mob descended on the driver and gave him the beating of his life in Asaba, the state capital, for allegedly taking a different route from other INEC drivers.

After loading election materials for Ethiope East and West from the Central Bank premises in the INEC pick-up van, the driver was said to have been stopped by the suspicious mob, who also noticed that he had no police escort.

The crowd thereafter descended on him when he could not provide any satisfactory explanations for his action.

It took the intervention of the police to save the driver form being lynched.

Antoine Griezmann To Remain In Spain Next Season?

Obasanjo Is Right About Boko Haram Trying To Islamise Africa –...