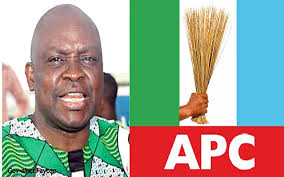 The Ekiti State chapter of the All Progressives Congress has accused Governor Ayodele Fayose of implementing policies that threaten the development of Ekiti people.

A statement by the APC Publicity Secretary, Taiwo Olatubosun, lamented that instead of promoting policies that would uplift Ekiti people out of poverty, the governor was busy diverting the attention of the people from self-sustaining schemes by distributing bags of one kilogramme rice to few people.

He argued that the timely payment of salaries could help workers do extra works at their spare time to increase their family earnings.

Mr. Fayose had promised to pay workers after the verification exercise, which he said was aimed at saving about N500m being lost to ghost workers monthly through the e-payment system.

The statement by APC, however, said “What the governor is doing is stark wickedness to the people by distributing one kilo rice for one-day need of the few out of millions living in abject poverty at the time more purposeful administrators all over the world are setting up self-sustaining schemes that permanently address the poverty problems among the masses.

“Distribution of a ‘congo’ of rice to Ekiti people at this period when he cannot pay salary is a wicked diversion of the people’s attention from real problems that confront them daily and threat to unleashing their entrepreneurial skills for self-sustenance and an attempt to turning elitist people into beggars.

“Is it rice they will use to pay their children’ school fees and other needs? Is the life of an elitist person now permanently reduced to rice alone?”

The APC spokesman also accused the governor of refusing to address the security situation in the state, which, he said, had scared away many investors and petty traders, while those with investments in the state were considering relocation over insecurity occasioned by kidnappings.

In his reaction, Governor Fayose said the APC lacked the moral rights to criticize his government policies having ran the state aground in the four years of former Governor Kayode Fayemi’s administration.

In a statement signed by his Special Assistant on Public Communications and New Media, Lere Olayinka, the governor said it was preferable “to give the people what to eat than spending billions of borrowed fund to build hilltop government house meant for just one family as done by the APC government”.

The governor asked the APC to mention the benefits derivable from the pavilion, Government House, civic centre and other white elephant projects that the party used borrowed funds to execute.

“Here is a party that used borrowed fund to plant flowers in Ado Ekiti and none of the flowers can be seen anywhere in the state capital talking about our government’s policies not being developmental”, the statement added.

INEC Must Be Given A Pat On The Back – Chief...

Seun Kuti Wants Gen. Buhari To Debate With Him