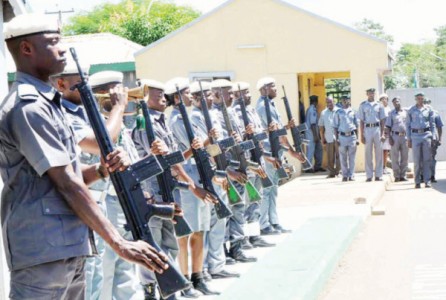 Mr. Atteh, according to a statement by the organisation’s Public Relations Officer, Mr Wale Adeniyi, gave the directive at a strategic session of Customs Management and Area Controllers.

The meeting deliberated with officers on various areas of revenue leakages and ways to put in place measures to plug them.

The customs boss also directed the immediate setting up of anti-corruption desks in all area commands to monitor officers’ conduct and report to his office accordingly.

On anti-smuggling activities, Atte directed the Federal Operations Units to intensify their border patrols to bring smugglers to book.

He also directed an immediate review of operational procedures to give maximum effect to the ban on all hinterland patrols in the country.

“All Task Forces under any name or guise operating in all seaports, airports and land borders are disbanded with immediate effect.

“Officers serving in these ad hoc units are to be withdrawn and redeployed immediately”, Atte said.
Atte further charged Area Controllers to assume full control of their areas, warning that they would be held liable for staff conduct and discipline in their jurisdictions.

There Is An Agenda To Play Up Fears In APC –...

We Will Face The APC Squarely When It Is Time –...