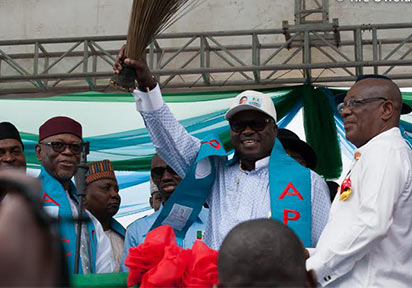 The Bayelsa State Peoples Democratic Party’s acting chairman, Chief Serena Dokubo-Spiff, has lashed out at former members of the party, who recently defected, describing them as politically irrelevant people with zero electoral value.
Dokubo-Spiff, who made this known in a statement in Yenagoa, the state capital on Sunday, was apparently referring to the mass defection of some PDP members to the All Progressives Congress at a mega rally held at the Samson Siasia Sports Complex in Yenagoa, Saturday.
Over 2,000 supporters of the PDP led by the suspended Chairman of the party in Bayelsa, Col. Sam Inokoba (retd.), a former Managing Director of Niger Delta Development Commission, Timi Alaibe, and Senator Heineken Lokpobiri, crossed over to APC in the mass movement.
Other prominent leaders of the PDP who dumped the party were former acting governors in the state: Chiefs Nestor Binabo and Werenipre Seibarugu; former House of Representatives members, Dr. Stella Dorgu and Nado Karibo; party stalwarts, Jonathan Omu and Diekivie Ikiogha, among others.
The defectors were received into the APC by its National Chairman, Chief John Odigie-Oyegun; a former Governor of Ekiti State and deputy national chairman of APC, Chief Segun Oni; former Governor of Bayelsa and leader of APC in the state, Chief Timipre Sylva, Bayelsa APC Chairman, Chief Tiwei Orunimighe, national party leaders as well as the State Working Committee of the party.
But Dokubo-Spiff, while reacting to the mass defection, said it was a huge disappointment and an embarrassment to the party and the entire Ijaw nation that the members, having benefitted immensely from the PDP that made them who they are today, abandoned the party.
He said by their conduct, the defectors had clearly shown that their action was largely motivated by greed and personal aggrandizement.
According to him, the defectors are “yesterday’s men and women, who no longer have electoral value and, as such, the PDP would not miss them”.
Dokubo-Spiff alleged that the defectors were politicians who sponsored candidates against the PDP in the last state House of Assembly election and worked with the opposition to betray both former President Goodluck Jonathan and the PDP at the last presidential election.
He added that the defecting politicians could not be regarded as dependable nor should they be celebrated by the APC as political assets, stressing that they were never at any time with the PDP.
He stated, “Suffice it to say that no member of the PDP in the state or any of the party’s organ was part of this charade called a mega rally. The PDP in Bayelsa State is intact. All the structures and organs of the party at all levels are fully intact”.

I Tried To Return To Atletico Madrid – Diego Costa

Osun State Government And US Firm To Sign MoU On Agriculture

Boko Haram: We Acquired Sophisticated Weapons In The Last One Year...