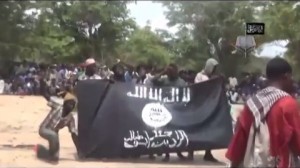 Borno State Governor Alhaji Kashim Shettima, has revealed that Boko Haram insurgents have lost much ground in his state. He said the terrorists now control only two local governments down from the 20 previously under the sect’s grip.

“They are presently controlling two local governments in Borno State; Abadam and Mobbar and partially in Marte,” he disclosed.

The governor’s comments came ahead of a conference of traditional and religious leaders billed for Maiduguri, the Borno State capital, today to brainstorm on ways to protect mosques in the state against terrorist attack.

Shettima spoke while receiving the Secretary to the Government of the Federation, Mr. Babachir David Lawal, who led a six-man committee inaugurated by President Muhammadu Buhari to pay condolence visits to Borno and Adamawa states, which both came under suicide attacks at their mosques on Friday.

The governor said the recent attacks in Borno should not be misconstrued as an act of authority of the insurgents but rather as noise aimed at attracting attention, adding that the insurgents are presently on the run and cannot be said to have a stronghold.

He said in order to prevent bombing at mosques, he had summoned all Imams of mosques in Maiduguri, Jere and surrounding areas as well as district heads, village heads and those manning streets called lawans and Bulamas, for a security meeting to be facilitated by the Shehu of Borno, Abubakar Ibn Umar Garbai Elkanemi.

The governor said the meeting scheduled for Sunday would discuss firm measures that might require policy pronouncements aimed at addressing the newest attacks on mosques during prayers as carried out by insurgents.

Governor Ajimobi Appoints Erubami as Oyo CJ, Others as Members

A European Digital Single Market Is Only Possible if Internet Users...