The All Progressives Congress (APC) has called on the Peoples Democratic Party (PDP) not to accuse President Buhari of masterminding the raid on judges by security agencies.

The Department of State Services (DSS) raided the houses of four judges on Saturday, October 8, 2016.

The party also called on security agencies to always obey the rule of law when carrying out their duties.

The APC in a statement issued by its national Secretary, Mai Mala Buni, said “The All Progressives Congress (APC) is concerned about the desperation of the Peoples Democratic Party (PDP) and some of its governors to drag the President into circumstances surrounding the reported raids of the homes of some judges by the State Security Service (SSS).

“The President Muhammadu Buhari APC-led administration strictly respects the principle of the Rule of Law and also adheres to the constitutional provisions of Separation of Power between the three arms of government.

“While the Party calls on all security agencies to respect and be guided by the rule of law in carrying out its constitutional duties, the APC finds the actions of some PDP governors and the reckless unsubstantiated allegations levelled by the PDP on President Muhammadu Buhari as the architect of the SSS raids curious and suspicious.

“The APC suspects that the PDP and the Ekiti and Rivers State governors, Ayodele Fayose and Nyesom Wike have something to hide. This is a red flag that security agencies must not ignore.
“Meanwhile, the APC will not to join issues on matters before the courts because it will be sub judice. We advice the PDP to tow the same line and allow judicial processes run it normal and legitimate course.

“The repeated allegations that ongoing corruption investigations and trials are politically-motivated by the President and the APC are baseless. The APC urges Nigerians not to be distracted by the PDP and their agents plot to discredit the hugely-successful war against corruption. For the umpteenth time, the PDP does not have the luxury of dictating how the current administration carries out its legitimate duty of catching looters, as long as it conforms to the rule of law. “Meanwhile, the APC calls on security agencies to check the continued and increased spate of politically-motivated killings and violence being perpetuated under the watch of the Rivers State Governor Nyesom Wike and the PDP in the state.”

The presidency also released a statement saying that the DSS followed due process before carrying out the operation. 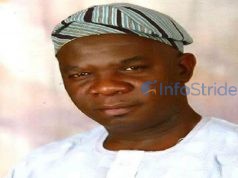 It Is An Insult To Call Just Anyone A Nollywood Veteran...

I Must Make The Best Decision For My Team – Antonio...