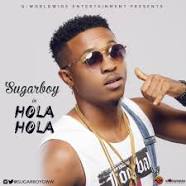 Sugar Boy of G-Worldwide fame dishes on his beginnings, how he bumped into music and discovered he wanted to build a career around it.

He describes his musical influences, the impact he hopes his music leaves on the listener and more in this interview.

How long have you been doing what you do? How did you get started?

I would say from age 14. I started from going to the studio with my friends to freestyling in my ghetto. But officially it was in 2010 when I featured on a record ‘Badman’ by Modenine.

Is there an early memory you’d like to share about getting into your craft, such as when you realized this was more than just a hobby or a passion?
Yes, I remember I had friends who were into music. I was not into music as such though I had mad love for music. All I knew was school, until one time when my friends invited me to a studio just to tell them if their song was good or bad. At the moment I stepped into the yard I felt peace lol. The music ambience and the challenge of creating music thrilled me, I said to myself “this is pure bliss and of course the true religion.” (Laughs).

How do you describe your sound to people who haven’t heard your music before?
My sound is Afro-Ragga: It’s the fusion of Afrobeat and reggae rhythms. I try to cross borders with my music, so I call my sound Afro-Ragga.

Who are your influences? What is some advice that has stuck with you?
I am influenced by my immediate environment and the happenings and sounds I listen to. Also, a major influence is my father who had all the albums of his time intact. Songs of Gregory Issacs , Bob Marley and the waiters , Fela Kuti , Brenda , Lucky Dube , Hendrix , Eric D and so on were on constant replay every other day.
One advice that has stuck with me is that Rome was not built in a day. I see that too, greatness is a process and nothing good comes easy on a platter .

What do you hope people take away from listening to your music?
I hope they see into the positive vibes I’m exhuming and live their potentials.
Tell us a little bit about your singles, the concepts/themes, the inspiration and creative process behind them

At the moment I have two singles – ‘Hola Hola’ and ‘Double’. ‘Hola Hola’ is an Afrobeat /dancehall tune and apparently a DJ favorite and street anthem. ‘Double’ is more of a motivational/reasoning tune and a song for everyone.

Generally, I draw inspiration from around me. Creating music is always fun. My producer, Beatburx and I synchronize easily.

What can we be expect from you for the rest of 2016?
The rest of the year is looking promising for me. I am already seven materials deep. ‘Molue’, ‘Raba’. ‘Upon me’, ‘Ghetto boys, ‘NAPO’, ‘Double’ and the mighty ‘Hola Hola’. Lol. It’s about tours, shows and appearances with more singles and videos on the way. I’m also recording and working on my album on the side. So watch out, Sugarboy may be in your city soon.