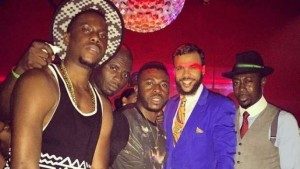 Jidenna was a recent guest on The Breakfast Club Power on a radio station to talk about his recently released album “The Chief”.

The ‘Classic man’ talks about the Grammys 2017, his relationships, inspirations, the Obamas and Donald Trump.

When asked who The Chief is, “My grandfather and father were both traditional chiefs. My grandfather, he was a dope dude.

I never met him but he in many ways inspired the life I’m living.

All around he was a don and that really influenced me.”

His late father, Theodore Mobisson was a tribal Igbo chief, which was a cultural mark of respect.

Buhari Has Lost Control Of His Government – Fayose

I Will Resign Once Napoli Players Stop Believing In Me –...