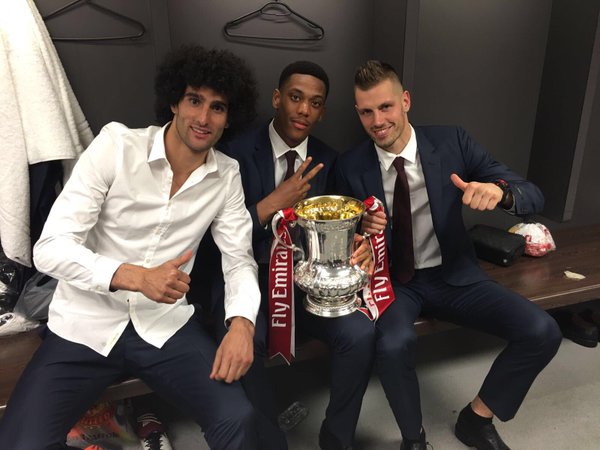 Anthony Martial has played for just 25 Premier League minutes so far this season. In that time, he has scored twice — once against West Ham and once against Swansea — while Manchester United have netted five times overall.

Last November, after not playing Martial against Feyenoord four days after starting him against Arsenal, Jose Mourinho warned the French forward he was not taking the opportunities offered to him.

“You have one opportunity, you have two, you have three,” said the United manager. “If you don’t bite then somebody comes and takes the bait.”

But now, Even Inter’s willingness to accept him on loan as a makeweight for Ivan Perisic has not convinced Mourinho to move him on.

“For me it’s simple,” said Mourinho on Saturday. “I can’t play Premier League, Champions League, FA Cup and EFL Cup with 11 players, I need a squad.”

Martial will have to wait his turn, but it’s coming.

Recently, Martial’s French compatriot Mikael Silvestre was asked whether the forward could be as good as Kylian Mbappe.

“Definitely,” was the former United defender’s reply. “Every time he touches the ball, even out here in training when it’s early doors, you can sense the danger. He can go left or right, and beat you with speed.”

On Saturday, Mourinho suggested he is now more involved in the dressing room: “Maybe that French language little group we have — Marouane Fellaini, Paul [Pogba], Romelu — is a group where he’s well integrated now and they bring him up.”

“We’re using him well and he’s coming with the right attitude,” he said. “He’s growing in confidence and, of course, two periods of 20 minutes and he’s scored two goals, so for his confidence it’s good.

MBGN 2011 Sylvia Nduka Talks On Rumor Of Marriage To Top...

Ocean provides IT support for customers, in exclusive deal with London...