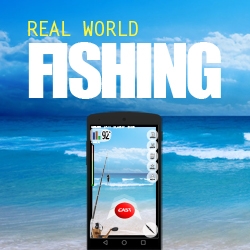 After three months of secretive planning on Kickstarter, RealWorld Games publicly announced Real World Fishing through the new “Kickstarter – Projects of Earth” program.When asked about the unique opportunity, RealWorld Games Chief Architect Matthew J. Mazer said, “I am excited we were selected to participate in this unique opportunity with Kickstarter. The Projects of Earth program is providing us with a great deal of needed exposure, which is key in a project as financially challenging as ours”

When asked about the financial challenges of his project, Matthew J. Mazer said, “The main challenge is the cost of bringing together groups of people who do not typically work with each other. The difference between an AR (Augmented Reality) and AW (Augmented World) game is that an AW game must integrate with Earth geography, and in our case, world scientific data.

Augmented World games require several specialized skill-sets not found at standard game development companies. As a startup with such specialized needs, we are leaning on Kickstarter to help us with our goals. We know the concept will sell itself, this is where gaming is headed“

To find out more about the Real World Fishing project, visit:

Success Or Failure Of Tourism Depends On Our Secure Environment –...

I Don’t Feel Sorry For Men That Women Show Pepper –...

No One Knows If Sanchez’s Career Would’ve Been Different At City...