All Progressives Congress (APC) Stakeholders in South-East on Wednesday applauded the party for sustaining democracy in Nigeria.

They also praised the APC government for translating the hopes and dreams of the people into reality and creating for Nigeria an environment of good order and civilization.

“APC government is the most efficient and accountable in the history of Nigeria’s democracy.”

At a meeting focused on mapping out strategies for the November 2017 Anambra State Governorship Election, the leaders praised the National Chairman of APC, Chief John Odigie-Oyegun for opening up the ruling party to every Nigerian citizen and compelling government functionaries at the various levels to better their people and their surroundings.

A statement from the South-East Unity and Advancement Forum (SEUAAF) after the meeting in Awka described the alleged N850 Million bribery story as wicked, baseless and reckless.

“The story is spurious. It is a political fabrication aimed at undermining the national chairman’s integrity and causing confusion in the party.”

The leaders condemned the suspended National Deputy Publicity Secretary of APC, Comrade Timi Frank and those behind him for encouraging anarchy in the party.

“We come from different background with divergent political ideologies. We also hold a variety of views. However, let us put the people ahead of political interest. Let us support President Muhammadu Buhari, Acting President, Prof. Yemi Osinbajo and the National Working Committee of our great party in creating a country which everyone experiences a better life. Let us work in cooperation for 2019.”

Oyegun, according to the leaders, transformed APC into a formidable, highly disciplined political machine that outperformed other parties in presidential, national assembly and governorship elections in Nigeria.

They also promised to teach All Progressives Grand Alliance (APGA), Peoples Democratic Party (PDP) and others a lesson in democracy on Saturday, November 18, 2017. 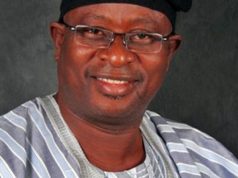 Kanye West Might Be A Father Of Another Baby

Jonathan Should Reduce Number Of Aides To Save The Economy –...