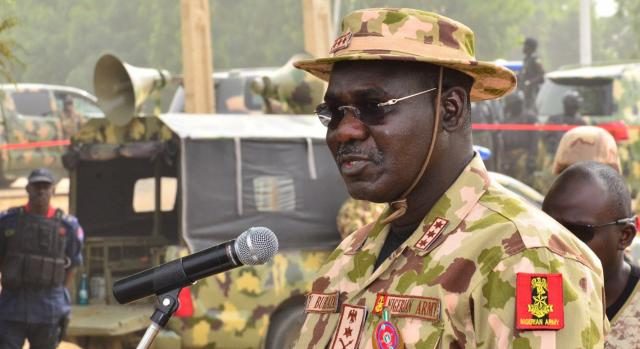 Chief of Army Staff, Lt. Gen. Tukur Buratai, has refuted the reports that the Nigerian army had a hand in how the election results turned out in the recent Presidential and governorship elections.

He said whoever is alleging that military participation decided the eventual winner should explain in detail what exactly he or she thinks is militarization in the first place.

He then spoke about how all the army did was simply help the police.

His words, “Militarisation has to be defined. What do you mean by militarisation? How exactly did the military take part in the elections? Generalisation is not the best. People just use the word militarisation without defining it. Was the so-called militarisation everywhere across the country? Why are people making so much noise about it? They are giving the impression that the military was involved in the entire process in the whole country. It is just probably a definition they only restricted to Lagos or where?”

People cannot just use the word militarisation in general terms to say the security agencies were involved. Who are the people involved? What does the Constitution say about the role of the military? We have the constitutional provision. We have made it very clear; we are not part of these elections, we are only supporting the police. Anything we do there is helping the police who are representing the civil authority in law enforcement and it is very clear that we have been called out to support the civil authority. That does not mean militarisation. And once we go out there, we are performing police role, it is not a military role, we are supporting the police essentially; that is very clear. The military was called out to come and support the police.

So, they are just using the military in order to justify their failures, to justify their inadequacies, to justify their inability to rig because the security forces provided the needed security to prevent massive rigging, ballot box-snatching and so on. But strictly, the use of the word, militarisation is misplaced, it is wrong. We were there to perform our responsibilities based on the invitation to support the police which is legitimate. There is no way you will say that the election was militarised; it is misuse of the term. If really the election was militarised, I tell you, nobody would take the law into his hands the way they did brazenly and deliberately did, even attacking our men, killing our personnel. An officer was killed, policemen were killed so if we were to take drastic steps to really show we were involved, it would have been worse than this. We were able to maintain law and order; we were able to conduct ourselves within the rules of engagement which is legitimate.

So there is a deliberate misconception or misinterpretation of the role of the military in order to malign the military and discredit it despite the stupendous efforts we have made to ensure security in support of the civil authority. And you know very well if the security agencies, including the military, had not come out to support the elections in providing security, the level of insecurity, the level of killings, arson, ballot box-snatching and so on, would have been worse than what was experienced. So many of the stakeholders, both at home and abroad, have commended the military for remaining neutral, impartial and conducting themselves professionally; but a few elements who felt they were not given the chance to rig and to disturb on a massive scale the election process, are the ones shouting that the whole process was militarised.

The military was not there to support any political party; we were there to provide adequate security as requested, in support of the electoral process. That was essentially what we did. So to say that the process was militarised is a misplaced use of word; it is unfortunate. Over the years, from our historical experiences, the outcomes or results of elections have been the major cause of instability in our polity. They have led to a lot of killings, arson, you name it: in Kaduna, Zangon-Kataf, Modakeke and so many other places. So historically, if you look at it, we had those unfortunate incidents because they were allowed to go out of control.

We had so many underlying factors; even in the First Republic, we saw the underlying factors that led to the civil war; it is the same outcome of elections that led to that, characterised by so many malpractices. So government doesn’t want the same thing to happen and that was why the military was called in to support the police. There is no way we would be partisan; the country’s stability, the country’s peace is our watchword, it is very, very fundamental. Some people just chose to blame different entities and bodies for their failures.”

You Cannot Buy Conscience Of Sokoto People With Money – Wamakko...

Igbo Politicians Must Do Away With Unnecessary Criticisms – Chris Ngige

“Chelsea Would Be Stupid To Sack Mourinho”