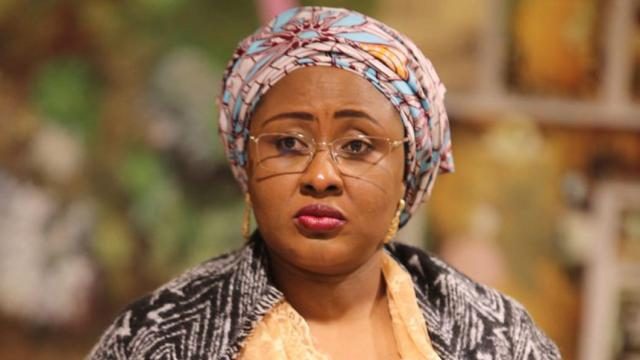 Nigeria’s first lady, Aisha Buhari has aired her opinion on the reports that said President Buhari was set to marry another wife.

Mrs Buhari was in the UK at the time the rumours broke, but she has had her say now.

According to the First Lady, it is not her business and PMB should be the one addressing it.

Her words, “Well I want to thank God for bringing me home safely. As you can see, I just arrived and for about 27 years now, between the months of June and July, we usually travel when our children are on holidays, and spend between 6 weeks to 2 months outside of the country.

I don’t really get the opportunity to spend too much time with my kids as you all know.

Like last year, I went to Spain, until Zahra gave birth and I spent 2 months before I came back.

The same thing this year. Our holiday period came around and we all went on holidays. However, I noticed I was a bit under the weather and my doctor advised me to stay back awhile in order to monitor my health properly.”

“From there, I left for Saudi Arabia, because I initially had the intention of participating in the Hajj (Pilgrimage). So, instead of coming back to Nigeria and heading to Saudi Arabia, I just went to England.

After the Hajj, I noticed I was feeling ill so I returned to England.

Now I’m working based on doctors’ orders, and the orders are–for me to slow down or take it easy on my daily activities and because of this, I would like to extend my gratitude to my husband for appointing Special Assistants to my Office to help me. In the past, I did everything on my own, but with the aid of Special Assistants I can now cater to my health and have time for my kids.”

On the marriage rumors, “I honestly don’t know what happened because I was not here. Secondly, it is Buhari they said will be getting married and not me, Aisha, so he will be in a better position to come and tell the public if it is true or false.”

“But the lady they said that he was going to marry and the person that told her the wedding was going to happen did not expect the wedding not to hold. Because it was after she saw that the wedding did not hold that was when she reached out to me. So I am not in the position to say they will get married or not, because I am already a married woman so it’s none of my business.”

I drew the attention of the regulatory bodies like NCC, NBC and the likes and I told them: “If you allow these rumors to continue, they will birth crisis that will be hard to handle. I’m not saying it because today people are saying see my husbands corpse, see my house, see the ambulance.”

Funke Akindele Is An Ambassador, She Should’ve Known Better – N6

Senate Sets Up Committee To #UndressNass