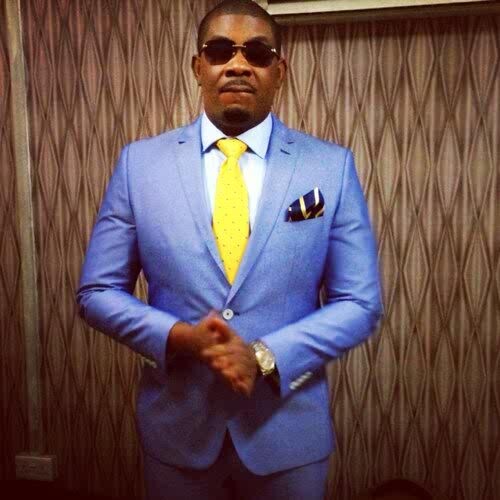 Popular record producer, Don Jazzy has replied a message he got from a desperate upcoming act who wants a free record deal.

Responding, Don Jazzy said, “Times are hard. It gets frustrating I know that. I wish I could sign everybody but I can’t.

But pls don’t give up and most importantly don’t be forced to send this sort of messages guys pls. Keep working and your time will come.” 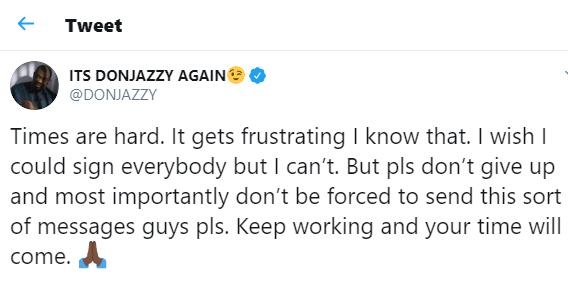 Do you see where he is coming from?

Ajereh is Isoko from Delta State. His mother is an Igbo princess from Abia state and his father was an origin of the Isoko people. He was born in Umuahia, Abia State. His family moved to Ajegunle, Lagos where Ajereh was raised.

Ajereh’s family moved to Ajegunle, Lagos where Ajereh was raised. He was educated at the co-educational high school, Federal Government College Lagos. Ajereh found an interest in music early in life and at age 12, began to play the bass guitar. He also gained knowledge of traditional and percussion instruments. Ajereh enrolled in business management studies at the Ambrose Alli University, Ekpoma, Edo state.

In 2000, Ajereh visited London. His uncle had invited him to play the drums for the local church. In London, Ajereh gained employment at McDonald’s as a security guard. He continued his interest in music, associating with Solek, JJC, Kas, The 419 Squad and D’Banj. Ajereh learnt producing skills from Emeka Infiniti at O-Town record company.

READ  I Love My Son – Timaya

On 7 May 2012, Ajereh announced a new record label, Mavin Records. Ajereh said, “I see Mavin Records being the power house of Music in Africa in the shortest possible time.” On 8 May 2012, he released an album featuring the artists signed to his label. The songs on the album included: Amarachi, Forever, Oma Ga, Take Banana and Chocolate, YOLO and the anthem I’m a MAVIN. Mavin records signed the vocalist, Tiwa Savage. Ajereh built a social network platform called “Marvin League” to complement and market his label.

On 5 November 2013, Ajereh had conflict with an artist, Wande Coal who left the label two days later.

At the Headies Awards 2015, Ajereh argued with Olamide. The two disagreed about who should have won the “Next Rated” award. Lil Kesh of YBNL records lost to Reekado Banks, Ajereh’s artist. The winner of the award received a car. Apologies on both sides were posted afterwards.

Kelechi Iheanacho Will Stay With Us – Claude Puel

PDP Losing No Sleep Over Obasanjo’s Endorsement Of Buhari