Military spokesman John Enenche on Monday said only 43 persons have been confirmed killed during the onslaught on farmers in Zabarmari, Borno on Saturday by suspected Boko Haram terrorists. 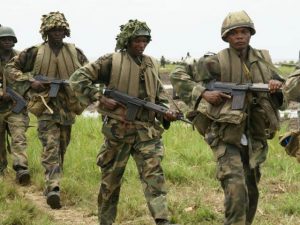 On Sunday, the United Nations had reported that 110 civilians had been killed.

“We have also received reports that several women may have been kidnapped. I call for their immediate release and return to safety,” the UN Resident Coordinator, Edward Kallon said, in a statement.

“The incident is the most violent direct attack against innocent civilians this year. I call for the perpetrators of this heinous and senseless act to be brought to justice.”

Responding to the UN report during his appearance on a Nigerian Television Station’s show, Enenche said the military’s casualty count still stood at 43.

“I have to respond, it is coming from the United Nations,” he said. “This is a source that identified itself that 110 persons specifically were killed.”

According to him, military officials accompanied Governor Babagana Zulum to the site of the killings where the 43 bodies were counted.

But some persons had fled the scene, as they tried to escape the onslaught.

The spokesman added that the military is still searching for casualties.

“Probably we may count up to the figure he gave in the future,” Enenche said. “But as it is, up till the time I came here, what we have counted with the locals is still 43. And we are hoping that we don’t get beyond that. So that’s the real situation.”