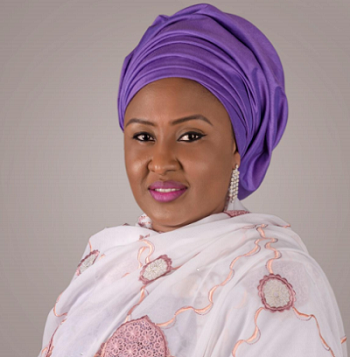 Wife of the President, Mrs. Aisha Buhari, has expressed concern over decline in the number of female members in the 8th Assembly.

Aisha spoke on Sunday in Abuja at a reception organised by the Committee of Friends in honour of former Governor Rotimi Amaechi of Rivers State.

She said for the nation to attain the 35 per cent affirmative action by 2019, men must encourage and support women to occupy key elective positions in the country.

“Supporting women to contest elective positions has become imperative as the number of female legislators have declined because some of them lost their seats during the last general elections.

“As the number of female lawmakers decline, we wish the men in Nigeria will support the women to attain the 35 per cent affirmative action in 2019”, she said.

Aisha specifically commended Chief Bola Tinubu, a chieftain of the APC, for the support given to his wife, Sen. Oluremi, in winning a senatorial seat from Lagos.

She urged men, particularly those in politics, to emulate the former Lagos governor by encouraging their wives to vie for elective positions, come 2019.

Aisha also commended Amaechi for his courageous roles that led to the victory of the APC in this year’s general elections.

She said Amaechi stood firmly by the party, showed commitment, courage and patriotism in ensuring that the country attained the positive change it was yearning for.

The wife of the president noted that as the Director-General of the APC Campaign Organisation, Amaechi showed “doggedness, toughness and steadfastness”.

Speaking at the event, the Vice President, Prof. Yemi Osinbajo, described Amaechi as “a man of tremendous courage, who stood the wrongs in the PDP, even when he was a member of the Party”.

He said Amaechi’s role in the last election stood out, and that accounted for why he was being celebrated.