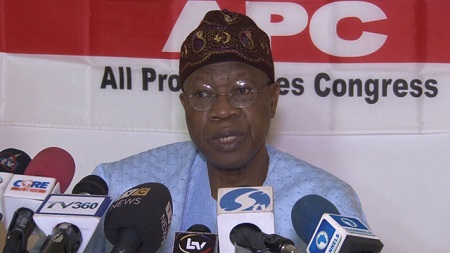 The All Progressives Congress, APC, has insisted that the Goodluck Jonathan Administration is not cooperating with the party’s Transition Committee, while describing the Peoples Democratic Party’s spokesperson, Olisah Metuh, as a man with an incurable disdain for the truth.

“We say, with all sense of responsibility, that as of today, May 14th 2015, just about two weeks to the May 29th handover date, no shred of information as to the status of governance from any Ministry, Department or Agency of government has been given to our Transition Committee”, the party said in a statement issued in Abuja on Thursday by its National Publicity Secretary, Lai Mohammed.

“If that qualifies, in Metuh’s lexicon, as cooperation, then there is a problem somewhere. We dare Metuh or anyone for that matter, to controvert the fact that not a line of handover note has been handed over to our Transition Committee. Until then, Metuh has egg on his face”, it said.

APC restated its earlier advice to Mr. Metuh to urgently undertake a crash course in how to be an opposition party spokesperson so he won’t talk or write himself into avoidable trouble in the days ahead.

The party admonished the PDP spokesperson to always cross-check the information available to him in order to separate rumours from facts, saying had he done that, he would not have issued the statement in which he tried to cast aspersion on the APC by accusing it of ‘fabricating lies’ over the issue of the Jonathan Administration’s non-cooperation with the APC’s Transition Committee.

“Metuh decided to put his foot in his mouth when he latched on to the statement made by our Transition Committee Chairman, forgetting that in making his statement, the Chairman was only acting the statesman that he is by not saying anything that will put the federal government
in bad light.

“A discerning party spokesman, rather than a rabble-rousing one, would have understood the elder statesman’s stand for what it is instead of using it as a peg to issue a needless, hollow statement that puts his party and government in bad light. We had decided to allow sleeping dogs to lie, but now that Metuh has stirred the hornet’s nest, it is time to put out the facts for Nigerians to judge.

“What happened was that, following the request by our Transition Committee to meet with them, they invited us to what was the first formal meeting between both Transition Committees. But the meeting was a mere photo-op, as it yielded nothing concrete as far as handover notes are concerned.

“In fact, what we met at the so-called meeting was far worse than what we had thought. Whereas we had hoped to get their handover notes on May 14th (the date they had indicated to us informally), they told us point blank that the notes won’t be ready until May 24th. Because this date falls on a Sunday, that means we won’t be getting the handover notes until May 25th, just four days before the May 29th handover date.

“How do they honestly expect us to peruse thousands of pages of handover notes, ask pertinent questions and seek necessary clarifications within four days? Because we want a smooth transition, we asked if we could meet with some of the ministers pending the release of the handover notes, but they said no. When one of their members even suggested that the whole process be fast-tracked, they did not budge.

“Despite this set back, we decided not to put the whole issue in the public domain, until the babbling Metuh decided to look for trouble, describing the deliberate stonewalling by the Jonathan Administration as cooperation”, it said.

APC assured Nigerians that whether or not the Jonathan Administration cooperates with it during the transition, the party will live up to expectation by providing purposeful governance.

Liverpool Will Not Overspend On Targets – Peter Moore