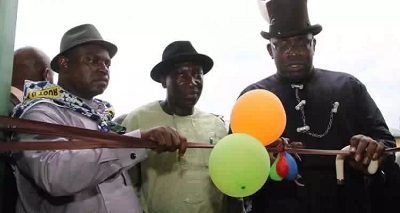 A founding member of the Peoples Democratic Party and former Chief of Staff, Bayelsa State Government House, Chief Diekivie Ikiogha, has dumped the party for the All Progressives Congress.

Ikiogha, who was redeployed in controversial circumstances from his position as Chief of Staff, Bayelsa Government House to the State’s Liaison office in Abuja, in a move interpreted as Governor Seriake Dickson’s way of easing him out of the mainstream politics of the state, spoke at a news conference in Yenagoa on Thursday.

The former Chief of Staff said he had left the PDP with thousands of his supporters and already found a home in the APC.

He said, “My constituents, the masses for whom I have lived and to whom I dedicate all my political victories, have agreed that I should leave the PDP.

“I recall in one of the meetings that led to the final decision to quit, how my supporters reminded me that the PDP I helped to form and nurture was no more the same.

“They said some hawks had hijacked the party, making it very glaring that it was a house in tatters, a divided house made of men who were only driven by their selfish ambition.

“Sadly, the PDP has badly drifted from a well organised family to a congregation of betrayers and deceits. It is clear that the party is gradually marching for destruction. Unfolding events have proved me right and I am happy I have left”.

Ikiogha said he had since found out that he was on the right path, just as he urged those in the PDP government not to witch-hunt those of them who had chosen to leave the party or carry out hate campaigns against them.

READ  As PDP Reps Caucus Threatens To Impeach Buhari, Here Is How To Impeach A President

He added, “As I make this move, I am just convinced that we are on the right path.  That is why I am urging all my compatriots who are still in the PDP to take that step and join us. I have seen life. I have seen hope. I have seen freedom. I have seen warmth. I have seen friendliness. APC is a family to be and behold.

“Unhappy as some people may be, troubled as my former allies in the PDP government in the state may, because of the light they have yet to see, I am urging them to play politics with love and not to haunt and chastise those of us who have decided to quit.

“Campaigns of hate will not help us, even as I am no longer in the PDP, former President Goodluck Jonathan is still my friend and big brother.”

The former Chief of Staff said he would on Saturday (tomorrow) lead thousands of his fans, associates and supporters to join the APC.

It would be recalled that Ikiogha became frustrated with the PDP after he resigned his appointment in October 2014 to contest the House of Representatives seat for Yenagoa/Kolokuma/Opokuma on its platform but was denied the ticket.

I Didn’t Audition For “Birth Of A Nation” – Chike Okonkwo