The draconian Beijing-imposed national security law, introduced to smother dissent and free speech in Hong Kong, has completed one year on Wednesday, leaving the once British-controlled region in turmoil and chaos. 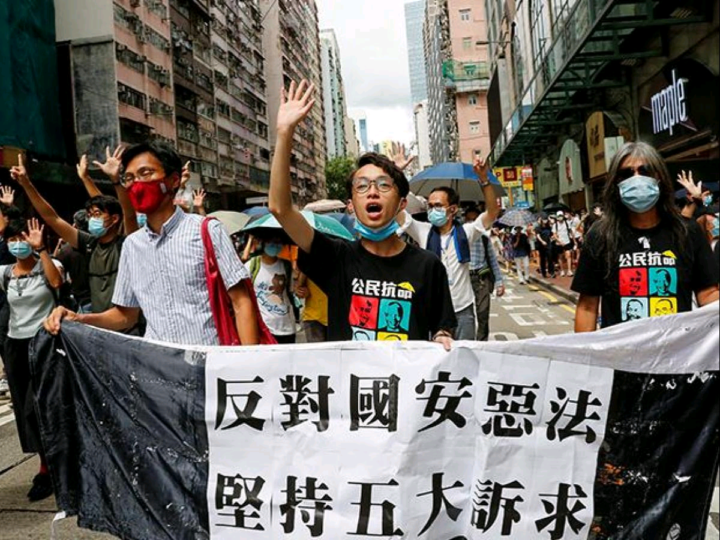 The law criminalises any act of secession (breaking away from China), subversion (undermining the power or authority of the central government), terrorism and collusion with foreign forces, with punishments of up to life in prison.

According to CNN, the bill was drafted almost entirely in closed-door meetings and even Hong Kong’s leader Carrie Lam was not part of those meetings. It came in effect from July 1, months after anti-government, pro-democracy protests that had infuriated the Chinese leadership, who saw them as an open challenge to their national sovereignty.

Though Chinese and Hong Kong leaders assured the public that the law would target a minority of individuals and not diminish freedoms in the semi-autonomous city, at least 117 people have been arrested and 64 charged as of June 27.

As soon as the bill was introduced, people had voiced alarm that the law could be used to stifle dissent. many feel that their worst fears have been confirmed as China has tightened its grip on Hong Kong and subjected the city to its strict laws and censorship.

More recently, Hong Kong’s 26-year-old pro-democracy newspaper Apple Daily shut its doors due to increasing government clampdown, after most of its staff and executives were arrested by the police. The Hong Kong police also froze the newspaper’s bank accounts and threatened others with imprisonment.

Chinese Foreign Ministry spokesperson Zhao Lijian denied the raid had been an attack to press freedom, calling it a “just move” done in “strict accordance with the law.”

Public protests have been banned and nearly all of the city’s leading pro-democracy figures, including activists and politicians, have either been jailed or forced into exile. Tens and thousands of citizens started emigrating to other countries and even educational institutions have been impacted by the draconian law, CNN reported.

Facing pressure from China, Hong Kong authorities have tried to pass a national security law before, most notably in 2003. However, they had backed down after mass protests. This was repeated once again when a bill was introduced that allowed extradition to China.

That unrest evolved into a massive pro-democracy, anti-government movement which at times grew violent. The city legislature was stormed, a university campus was held under siege for days, a man was set on fire and another shot and critically injured by police. The Chinese government was greatly perturbed by the protests.

When the security law came into effect on July 1, hundreds turned out to protest, clashing with riot police who fired tear gas and rubber bullets, leading to the first arrests under the new law.

Soon after the imposition of the law, schools were ordered to remove textbooks that could violate the law, authorities set up a national security office, allowing mainland Chinese agents to operate in the city for the first time, student activists were arrested for social media posts, and pro-democracy candidates were barred from standing in legislative elections on national security grounds, according to CNN.

This lead to international scorn from countries such as the United States, the UK, Canada, Australia, New Zealand and more. While Washington revoked Hong Kong’s special trade status and implemented several sanctions, other countries suspended extradition treaties with Beijing.

On August 2020, 12 Hong Kong residents were arrested for attempting to reach Taiwan by boat, and detained in the mainland for months without access to lawyers. Several have since been released back to Hong Kong, where at least one was charged under the security law.

The biggest blow came in November, when Beijing granted Hong Kong authorities the power to expel elected lawmakers for not being “loyal,” or refusing to acknowledge Beijing’s sovereignty. Following this, four lawmakers were immediately expelled, prompting all the remaining elected pro-democracy lawmakers to resign in protest.

In January this year, at least 53 former lawmakers and opposition activists were arrested for “subverting state power” as they took part in an unofficial primary election the previous summer, designed to field the strongest pro-democracy candidates in a legislative election that, in the end, never took place, ostensibly due to the COVID-19 pandemic.

The Chinese central government also continued to rejig Hong Kong’s electoral framework, passing a law in March that changed the make-up of the city parliament to be dominated by government-appointed or influenced seats.

Under the draconian security law, websites have been blocked on national security grounds, and the film censorship guidelines revised to abide by the law. The annual book fair, to be held this year in July, warned that the police would be called if any exhibits or materials were found to violate the security law, CNN reported.

Even as journalists and activists continue to be persecuted, Hong Kong leaders have come out in support of the law.

“The objective is to maintain long-term stability and prosperity in Hong Kong,” said Carrie Lam, the city’s leader, several days after the Apple Daily raid. “The enforcement of the National Security Law and its implementation is to maintain national security.”

One year after the law, Hong Kong looks very different from the rebellious city of protest it had been for decades. With Hong Kong increasingly being brought under Chinese rule, many local residents are looking overseas.

The threat of arrests and asset freezes has also thrown into question Hong Kong’s viability as a base for international businesses. Some firms have reduced their presence in Hong Kong due to political pressure.

It would be safe to say that under tightening Chinese control, Hong Kong’s future appears to be bleak.

India Supports People Of Afghanistan In Realising Their Aspirations: MEA

Benitez Is Not A Liverpool Through And Through – Gerrard

Meghan Markle Can’t Deny Me Access To My Grandchild – Father