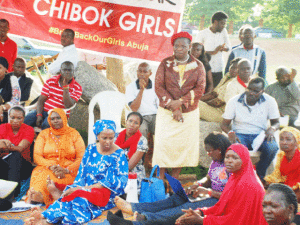 In defiance of security threats to its members, the #BringBackOurGirls (BBOG) Group has returned to its normal daily sit-out sessions in Abuja in continuation of its campaign for the rescue of the over 200 Chibok schoolgirls abducted by the Boko Haram sect.

The group, which was allegedly faced with threats of attack at its Unity Fountain daily sit-out venue and held a session at a private residence on Sunday, came out yesterday for a public sit-out and pledged to continue with the safe release of the schoolgirls, despite threats.

Security operatives had openly mounted surveillance on the daily sit-out meetings of the group at the Unity Fountain in Abuja after the impromptu protest at Aso Rock three weeks ago, but had recently disappeared.

As part of the programme for the day, the group took out time to appreciate the military and other security agencies that had been fighting the insurgency and participating in the push for the rescue of the abducted girls.

The BBOG Group called on the federal government to ensure that the security personnel were adequately equipped for the task of fighting insurgency by also ensuring that the relevant government parastatal buries and honours fallen officers in the campaign accordingly.

Clarifying its stand in the face of the struggle and campaign for the rescue of the girls, the group noted that appreciating the military and other security agencies did not imply weakness, but was an act of being good citizens and respecting and appreciating hard work.

Palestinians will seek membership of 60 United Nations bodies and international...

I Want To Be Single For Now – Yung6ix