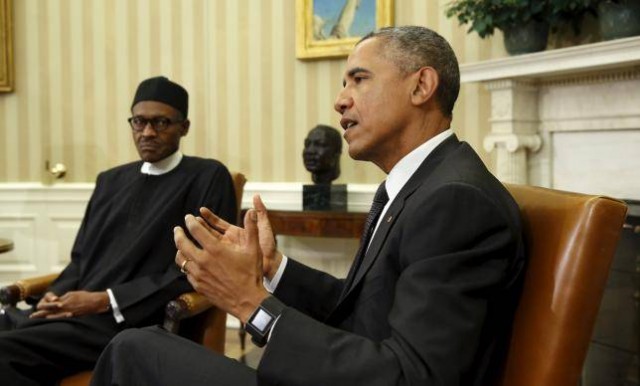 President Muhammadu Buhari has returned to Nigeria after four days in Washington.

While in the United States, Buhari met with US President Barack Obama whom he discussed Nigeria’s security issues with. The two leaders also discussed Buhari’s economic plans and how to strengthen the relationship between Nigeria and the US.

President Buhari also told US lawmakers point-blank that sodomy was against the law in Nigeria and as such the country will not legalize gay marriage.

He was part of several sessions where he answered questions relating to his administration’s plans for Nigeria. Buhari was also interviewed by CNN anchor Christiane Amanpour who asked about the president’s position on negotiating with Boko Haram.

Before he returned to Nigeria, Buhari played host to his War college mates at the Blair House on Wednesday.

Now that the all-important US trip is behind him, Buhari is expected to announce plans that will boost the economy, especially now that the Naira is crashing. Naira dropped to 241 to a dollar, Wednesday.

The post Buhari Returns To Nigeria; To Announce Plans That Will Boost The Economy appeared first on INFORMATION NIGERIA.

I Know Buhari Will Not Perform – Fayose

Davido Buys Chioma With Porshe As She Turns 23