Bukola Saraki’s Trial: By Hook Or By Crook?‎ 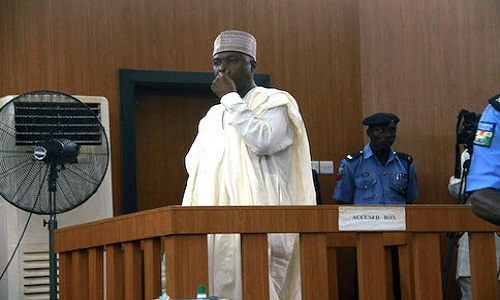 To say that a large percentage of socially and politically conscious Nigerians have followed keenly the continued persecution of the Senate President of the 8th National Assembly, Dr. Bukola Saraki, for simply defying the odds in clinching the highly coveted position will not be an understatement. The Senate President himself has stated categorically the very reasons he continues to be victimized and treated as such. Hence, one cannot but wonder that if one person who holds such a sensitive position as this can have his colleagues on the political field of play deliberately tilt things against him and shift the goal post, then what fate awaits ordinary Nigerians.

In recent times, two matters have come up that once again question the credibility of the supposed war against corruption as bordering more around the precincts of overall political persecution. First, was the rumoured withdrawal of the services of the prosecuting counsel in the matter, Rotimi Jacobs SAN for no just reason other than the fear that he will and even has been compromised having reportedly cut his legal teeth under the tutelage of the defence counsel, the vintage former Minister of Justice and Attorney General of the Federation, Kanu Agabi SAN. The second, was the noticeable flaw leading to the apparent withdrawal of two out of the thirteen count charges brought against the Senate President.

These developments have continued to show that the government is indeed under enormous pressure to deliberately ensure the prosecution and political persecution of the Senate President without any due regard for the rule of law despite no legal backing for the matter at hand. The Danladi Umar – led Code of Conduct Tribunal for reasons both known and unknown remains a major tool toward achieving this end. It remains visible to even the blind and audible to the deaf that a script is in play with very strict instructions to nail, shame and even jail Dr. Bukola Saraki through any and all means possible. This trial has proven to be a manual on getting your enemies by hook, or by crook!

We have seen the law bent in the course of the determination of the pretrial matter of jurisdiction particularly regarding salient conditions precedent to arraignment before the tribunal. Without the least doubt, when eminent jurists who have spent a major part of their years on the bench rise and speak on an issue, their thoughts and words remain golden. Retired Justices George Oguntade, Alfa Modibbo Belgore and Samson Odemwingie Uwaifo have spoken unequivocally on the status of the Code of Conduct Tribunal in relation to Courts of criminal prosecution unlike the powers what the Code of Conduct Tribunal continues to arrogate onto itself in its own wisdom.

Learned Gentlemen and Counsels such as the reputed Constitutional Lawyer, Professor Ben Akabueze, Chiefs Nnoruka Udechukwu SAN, Emeka Ngige SAN and Mike Ozekhome as well as a former NBA Chairman, Olisa Agbakoba SAN have also raised the voice of reason to cite the flaws in the running of the case and the extent to which the CCT has continued to go beyond its constitutional bounds; yet no one is willing to do the right thing, because to the government, by hook or crook, Saraki must go.

Furthermore, the withdrawal of the same charges against the former Minister for Niger Delta Affairs during the PDP Government, Elder Godsday Orubebe as well as the acquittal of former Lagos State Governor and APC Chieftain, Asiwaju Bola Tinubu for the same reasons of not first allowing them to make a statement at/with the Code of Conduct Bureau as a condition precedent to trial at the Tribunal has indeed validated the concerns of many Nigerians that the continued trial of the Senate President is indeed being pulled by disgruntled individuals who soundly hate Dr. Bukola Saraki for his courage and political sagacity in becoming the Number Three Citizen of the Federal Republic.

For every adjournment, the CCT, under its Chairman, Danladi Umar will only continue to show to the world its jaundiced and narrow grasp of the law while putting the anti – corruption crusade of the government itself on trial and not Dr. Bukola Saraki. It is indeed also necessary to point out that while the learned prosecuting counsel, Rotimi Jacobs SAN has taken this matter interestingly personal in his quest to add this Code of Conduct Tribunal conviction to his belts of achievements, he should understand that he remains a pawn in the hands of some Nigerians who simply want his services to achieve their own selfish aims. I will not end this piece without a word of advice to the learned prosecutor that it remains trite that he maintains and respects the rule of law by allowing the defense to all legal aids it might require in the pursuit of this proving his innocence.

As a concerned Nigerian, it is best for the Federal Government to simply tow the path of honour by withdrawing the matter against the Senate President quietly, apologize unequivocally to him, and take a step further by removing all traces of the currently visible fingers of politics, witch-hunting and politicking in order to validate its posture and war against sleaze, graft and corruption.