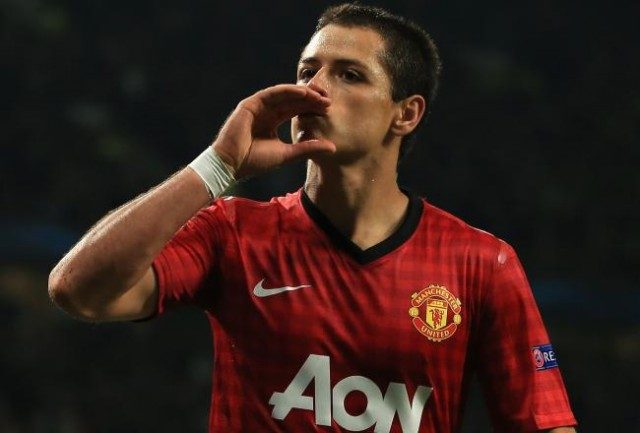 Javier “Chicharito” Hernandez is the all-time top scorer in Mexico’s history and third on the list of Mexican players to score in Europe (behind only Hugo Sanchez and Carlos Vela). But as he prepares to join West Ham, his time at Bayer Leverkusen has shown one thing: that he thrives when given a chance to shine.

Hernandez never settled at Manchester United after spending five years at the club having arrived from Guadalajara in 2010. And when Manchester United coach Louis van Gaal and assistant Ryan Giggs exchanged a knowing glance when the striker missed a second-half penalty in a 4-0 win against Club Brugge in late August 2015, it was clear the Mexican’s time at Old Trafford was up.

Having only just returned to England after spending the previous season on loan at Real Madrid (where he scored nine goals in 33 games), Manchester United cut their losses and sold Hernandez to Leverkusen for around £7 million.

After 103 matches and 37 goals — with a league-high of 14 coming from the bench — his 44 appearances as a substitute had earned him a reputation as a “super-sub” but given him little chance to cement his place in the XI.

But in Germany, for the first time in his European career, Chicharito was no longer second-choice and became one of the key players in Bayer’s attack during a largely successful season that saw them finished third behind the league’s two powerhouses Bayern Munich and Borussia Dortmund in 2015-16.

Mostly used as the left attacker in then-Leverkusen coach Roger Schmidt’s hard-running 4-2-2-2 system, Hernandez, after a short period of adaptation, started to clock up the goals: a total of 26 in 40 matches in all competitions that season. Contrary to his time at United, Hernandez started 38 of them and over his two seasons he played the third-most games of all Leverkusen players.

Though the goals did not come so easy in a difficult second term at the Bay-Arena, he still managed a total of 39 goals in 76 matches. And, in total, he had 87 shots on goal, more than any other Bayer player in those two seasons, and nearly 45 percent of those shots made it past the keeper.

But his time at Leverkusen can’t simply be qualified by the number of goals he scored. The striker also boosted Leverkusen’s profile in the United States and Mexico, where the Bundesliga club became a household name, and his selfless runs opened up plenty of space for his teammates.

Hernandez perfectly fitted into Roger Schmidt’s idea of long-ball football. He held the ball up between the lines, waited for the wingers to catch up, distributed, and moved into the penalty box to find a position where he was most effective. His one weakness remains tracking back and helping out when his side need to recover the ball, but it’s clear that he thrives when given more games.

Yet, in his second season at the Bay-Arena amid the collapse of Roger Schmidt’s system, it became evident that Chicharito has not overcome a certain weakness. While he works incredibly hard when his side’s in possession of the ball, tracking back and helping out his teammates trying to recover the ball was until this day does not remain his biggest strengths.

The 29-year-old arrives back in the Premier League at the perfect time. He still has some good years ahead of him, has the experience needed to success in England and now has the confidence to showcase what he can as a starter.

West Ham came 11th in “goals scored” (47) in the Premier League last season, 15th in shots attempted (9.4 percent) and last in the ranking for shots on target (26.9 percent), so they will certainly appreciate having a goal scorer in their ranks.

Hernandez, for his part, will be seen to show Manchester United what they missed when he lines up against his old side in the first match of the new Premier League season on Aug. 13.

Statement by Ambassador Samantha Power, U.S. Permanent Representative to the United Nations, on the Violence in South Sudan, May 20, 2015