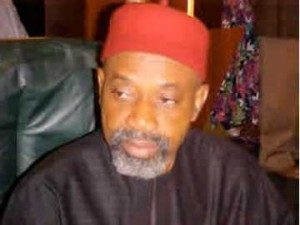 The Minister of Labour and Employment, Senator Chris Ngige, said on Thursday, June 30, in Abuja that the death of Chief Ojo Maduekwe, a former National Secretary of the People’s Democratic Party (PDP), was a huge loss to the country.

A statement signed by Mr Samuel Olowookere, the Deputy Director (Press) in the ministry, quoted Ngige as saying that Nigeria had lost “a brilliant technocratic and hardworking politician who was philosophical in thinking and logical in disposition”.

“Ojo was sophisticated in knowledge and brutally frank, but devoid of intellectual arrogance. Such a genre is often uncommon among the political class; hence, he was often misunderstood.

“But he gave his best to the nation, having served as the Minister of Culture and Tourism and at another time, Minister of Transport, Foreign Affairs and later, the Ambassador to Canada.

“I, therefore, join the family, relations, friends, the political class and the entire nation in mourning this patriot, who made outstanding contributions to nation building and left an indelible mark in the political history of Nigeria.

“I pray the Almighty God to grant him eternal rest and console the family he left behind,’’ Ngige said in the statement.

Maduekwe also served as minister of foreign affairs and culture and tourism, during the Umaru Yar’Adua and Olusegun Obasanjo administrations, respectively.

Press Statement of the the Peace and Security Council of the...

Liverpool Is Yet To Achieve Anything This Season – Alex Oxlade-Chamberlain

Femi Otedola Lives His Life For Others – DJ Cuppy