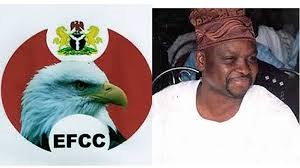 The Economic and Financial Crimes Commission has described as false, media reports that it had dropped corruption case against the governor-elect of Ekiti State, Mr. Ayodele Fayose.

The Head of Media and Publicity, Mr. Wilson Uwujaren, on Monday said that the recent election of Fayose had not affected the ongoing trial of the former Ekiti State Governor for alleged corruption.

Uwujaren insisted that the case was still ongoing at the Federal High Court, Ado-Ekiti, Ekiti State.

He noted that the case would come up for hearing at the Federal High Court, Ado-Ekiti, on July 15, 2014.

The EFCC spokesman added that the immunity clause only provided a cover from prosecution for the President, the Vice President, sitting governors and their deputies and not a governor-elect.

His words: “The EFCC has not dropped the case against the former Governor of Ekiti State, Mr. Ayodele Fayose.

“The trial is still going on; it is continuing at the Federal High Court, Ado-Ekiti. In fact further hearing comes up on July 15, 2014.

“As you know, immunity from prosecution applies only to the President, the Vice President, sitting governors and their deputies”.

Uwujaren added that the case against Fayose, who is expected to be sworn-in as Governor of Ekiti State come October, has made substantial progress as the commission had called two witnesses to testify in the case.

Uwujaren also said that the issue of whether the case against the governor-elect would be withdrawn or not when he finally takes oath of office as governor was a matter for the court to decide.