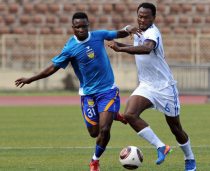 The African football calendar takes a new dimension with all the lenses focused on continental club action following the successful completion of the Orange African Nations Championship (CHAN) in South Africa last week.

This year’s continental club action will be launched at the weekend with the preliminary round of matches of both the Orange CAF Champions League and the Orange CAF Confederation Cup. For the prestigious Orange CAF Champions League, which marks its half-century anniversary this year, seven former winners will be involved in the preliminary round. The septet; Enyimba (Nigeria), Moroccan duo Raja Athletic Club and AS FAR, AS Vita Club (DR Congo), Asante Kotoko (Ghana), ES Setif (Algeria) and Zamalek (Egypt), will all be playing as hosts in this weekend’s first leg matches. A total of 26 matches are expected to take place across the length and breadth of the continent as the journey for the crown, held by Egyptian giants, Ahly begins. The centre of attraction will be on players who donned their national colours at the tournament designed exclusively for footballers playing in their domestic leagues, but this time, in the colours of their respective clubs. Fresh from their triumph at the CHAN tournament, Libyan club Ahli Benghazi has a huge task of carrying on the fairytale story of the North Africans against Foullah Edifice of Chad. Due to security concerns, the match will take place at the Chedli Zouiten Stadium in neighbouring Tunisia’s capital of Tunis on Friday, but Ahli Benghazi have the trio of Abdelrahman Fetori, Muataz Fadel and Ahmed Alwani, from the jubilant Libyan team to rely on for a perfect start to their continental campaign. In Rabat, three-time winners Raja will face Sierra Leonean side, Diamond Stars in an encounter that favours the hosts. The Moroccans, runners-up at the FIFA Club World Cup last year on home-soil have a point to prove despite their unimpressive performance in the local championship. Elsewhere in Maputo, Liga Muculmana of Mozambique will square CNaPS Sport of Madagascar in an-all Southern African affair. On Saturday, Raja’s city rivals AS FAR will be up against AS Real of Mali also in Rabat whilst Sporting Praia Cruz of Sao Tome and Principe will lock horns with Stade Malien of Mali in the Island of Sao Tome. Ivorian torchbearers, Sewe Sport will face FOS Balantas of Guinea Bissau in Abidjan whist Diables Noirs of Congo engages Flambeau de l’EST of Burundi in Brazzaville. Senegalese side, Diambars, founded by ex-footballers Jimmy Adjovi-Boco, Bernard Lama, Patrick Vieira and Saer Seck, will make their continental bow against familiar face, ASFA Yennenga of Burkina Faso at the Caroline Faye Stadium in the coastal city of Mbour, located south of the capital, Dakar. The club that has produced the likes of France-based duo, Pape Souare and Idrissa Gueye (both of Lille) face a difficult task against ASFA Yennenga, hoping to go past the prelims after crashing out at the same stage last year. South African champions, Kaizer Chiefs, currently sit atop of the Premier Soccer League standings with a 10-point lead and will be testing their new found form against Black Africa of Namibia. Amakhosi are bent on making an impact just like their bitterest rivals, Orlando Pirates, who were losing finalists last year and coach Stuart Baxter is eyeing a win in the first leg to spark their target. “The fact that we play at home in the first leg is important. We have to win at home and take the pressure off us in the away leg,” said Baxter. Ugandan representatives, Kampala City Council will travel to Omdurman as guests of Sudanese champions, El Merrikh. The latter returned to their base last week after a training tour of Qatar that saw them engage European champions, Bayern Munich, Zenit St. Petersburg of Russia, Austrian side, Red Bull Salzburg and Al Wahda of Jordan in test games. German coach, Michel Kruger on his third stint with ‘Al-Zaeem’ after 2008 and 2010 has built a team around foreign-imports such as Ivorian duo, Pascal Wawa and Olivier Tie, Mohamed Traore and Bassiru Bamba (both from Mali), Isaac Malik (Nigeria), Shimelis Bekele (Ethiopia) and Ghandy Kassenu, to complement with old guards Ahmed Basha and veteran Haitham Mustafa for the campaign. Tanzania champions, Young Africans, will be hoping to make their two-week training camp in Turkey count against Komorozine Sports of Comoros. Dutchman Hans Van der Pluijm, who guided former Ghana champions, Berekum Chelsea to an impressive outing on their debut appearance in the premier continental club championship two years ago, has enough experience up his sleeve to take ‘Yanga’ to the promise land. Angolan big spenders, Kabuscorp will make their bow in the African club championships against Cote D’or of Seychelles in Luanda. The capital-based that had Brazil legend, Rivaldo on their roster two years ago, have signed up DR Congo and TP Mazembe midfielder Tresor Mputu Mabi as they seek to make a huge impact. With former Cameroon striker Albert Meyong also in their squad, the Angolan club wrapped up a two-week training camp in Portugal to prepare for the encounter with their Seychellois guests. Rivals Primeiro de Agosto will also engage Lioli FC of Lesotho in an interesting clash, also in Luanda, whilst Kenyan champions, Gor Mahia cross swords with US Bitam of Gabon, handled by former Cameroon midfielder, Francois Omam-Biyik in Nairobi.

The biggest game of the weekend is the clash between 1973 winners, AS Vita Club of DR Congo and Nigerian champions, Kano Pillars in Kinshasa on Sunday. The encounter will see players who featured at the just ended CHAN playing against each other; Mubele Ndombe, Heritier Nzinga, Herve Lomboto, Lerma Mabidi for the Congolese side and the Nigerian pair of Rabiu Ali and Abubakar Shehu.

Pillars based in the northern part of Nigeria have boosted their technical team with Okey Emordi, who is no stranger to the continental club championship terrain having guided Enyimba to the title in 2004. Nigeria’s other representatives, Enyimba will be at home to Togolese debutant, Anges de Notse whilst Astres Douala of Cameroon sort things out with Akonangui of Equatorial Guinea in Douala. Former winners’ Asante Kotoko and ES Setif have tricky tests against Barrack Young Controllers and Steve Biko of Liberia and Gambia respectively.

Congolese champions, AC Leopards will battle it out with Rayon Sports of Rwanda in Dolisie, Dynamos of Zimbabwe against Mochudi Center Chiefs of Botswana in Harare whereas Dedebit of Ethiopia versus KMKM FC of Zanzibar in Addis Ababa. Elsewhere at the Air Defence Stadium in Cairo, former Egypt forward, Ahmed Hossam “Mido” will have a first taste of international action as Zamalek coach, when the five-time winners square AS Douanes of Niger.

Portugal’s Victory Vs Sweden Would’ve Been Easier With Ronaldo – Bruno...

Members Of PDP Must Be Recognised If Harmonisations Will Work –...