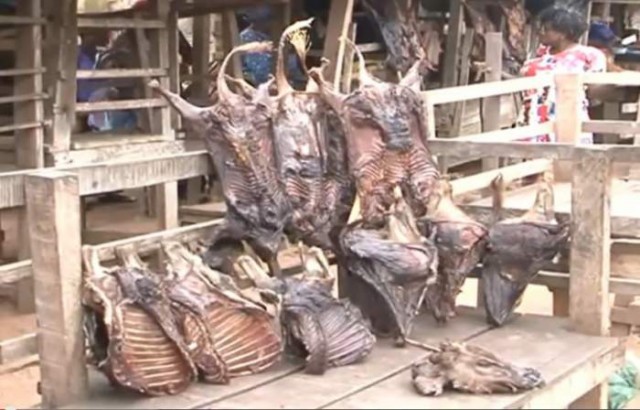 The bush meat sellers in Kosubosu Community, Kwara state, said on Tuesday that business was gradually picking up two months after the outbreak of the deadly Ebola Virus Disease, EVD.

Some of the meat sellers said they had started enjoying patronage again, after customers deserted them because of fears of contracting the Ebola virus.

Some West African countries, including Nigeria, recorded deaths at the peak of the Ebola disease crisis with the World Health Ogranisation putting the number of deaths in the sub-region so far at about 2,793.

Fatimoh Ibrahim, a bush meat vendor at Kaiama Market in the Kaiama Local Government Area of Kwara, said that the outbreak had serious negative impact on bush meat business.

She, however, expressed her delight that business was gradually picking up.

“Before the disease outbreak, we usually sold all the products daily but when Ebola came, we will wait endlessly for days for buyers”, she said.

Her colleague, Aishat Lawal, said she was almost frustrated out of the business.

“Business has been quite frustrating in the past two months but thank God we now enjoy four to five patronages daily. We almost closed shop as some people kept telling us that we should stop the business except we have intention of killing people. We, however, kept faith in the business because we don’t have any other means of survival”.

The traders who commended the Federal Government for containing the disease, however, appealed to government to put measures in place to eradicate the disease completely in the country.

They argued that this would allay fears of the public and improve socio-economic activities in Nigeria. (NAN)

2023: Why My Wife Will Never Forget Amaechi – Gov El-rufai