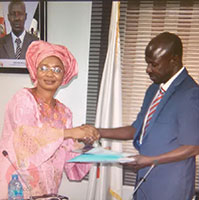 The Economic and Financial Crimes Commission (EFCC) has arrested a Commissioner of Police, Victor Onofiok, over alleged N1.9 billion fraud, The Nation reports.

The suspect, who is said to have been detained, allegedly favoured companies close to him in the award of contracts.

“A serving Commissioner of Police, Victor Onofiok, is being grilled by operatives of the EFCC over a N1.9 billion fraud,” the newspaper quoted a source to have said.

“Onofiok, who is the CP Works at the Force Headquarters, was detained on November 30 after he was released for interrogation by the police.

“The officer, who has been CP Works since 2014, is alleged to have awarded contracts worth more than N1.9 billion to ‘companies’ in which he has interest.

“These entities were found to be mere business names and not limited companies,” the source said.

It was gathered that the EFCC is still on the trail of some likely accomplices of the suspect.

The source added: “So far, the CP is still in detention, but we cannot rule out likely accomplices. We are considering all clues.

“I can assure you that all those connected with the fraud will be brought to book.

“We have however intensified investigation.”

The newspaper also cited a police source to have said the force released Onofiok to the EFCC on the order on the request of the Inspector General of Police.

“We are awaiting the outcome of the police preliminary investigation before we can talk of the next disciplinary action against him,” the source said.

READ  Buhari Will Be Exposed Soon, President Not In Charge — Primate Ayodele

Onofiok was said to have been elevated to the post of CP on January 23, 2014.

We Are Committed To The Re-Election Bid Of Buhari – Kwara...

It Was Such A Struggle Trying To Get Movie Roles –...