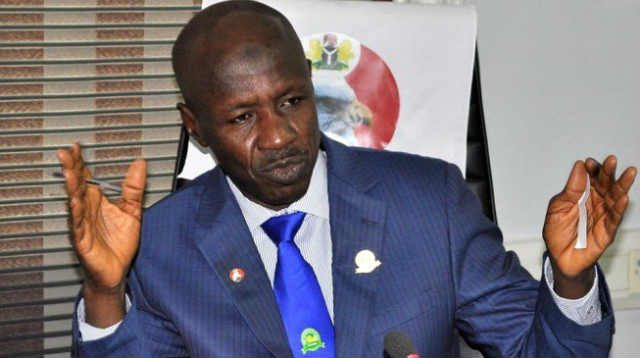 The Economic and Financial Crimes Commission (EFCC) has given Diezani Alison Madueke its word to extradite her as soon as possible.

The EFCC scribe, Emmanuel Aremo made this known to the public while speaking with protesters led by Charly Boy.

He said “We have an MOU with the British Government, we have bilateral agreements on how to repatriate citizens and that is being followed. The Ministry of Justice is taking steps and we are also taking steps but one thing I will let you know is that we are not relenting in our efforts.”

Speaking on behalf of the protesters, Deji Adeyanju also called on the anti-graft agency not to wait for the Federal Government before taking the necessary steps.

According to reports, Charly Boy also said “I am here to give support and ginger the youths who have finally decided to wake up from their docility and their slumber. We are here to force a discussion on this war on corruption. Is it only being fought on the pages of newspapers and why haven’t we had a conviction so far and why haven’t the guilty been punished so far?

“So, I am here to join the exceptional Nigerian youths to ask questions and hold the government accountable to the promises that have been made.

“If they cannot get a conviction for Diezani there (in London), let them bring her back home. Our eyes are on the Diezani matter and I am hoping that it won’t be business as usual.”