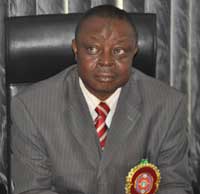 The Secretary to the Economic and Financial Crimes Commission, EFCC, Emmanuel Adegboyega Aremo has urged Nigerian youths to embrace positive values and shun all vices, especially corruption. He gave the advice Wednesday January 15, 2014 at the Commission’s headquarters, Abuja when he was presented with a distinguished role model award by members of the Akoko Youth Congress.

Leader of the three-man AYC team, Comrade Aluko Rasheed said the honour for the EFCC scribe is in recognition of his selfless service and exemplary conduct.
“Your good conduct and administrative style coupled with your numerous

charitable works has fundamentally amazed our union. Your passion for humanity and your incomparable dedication to the physical development of our dear country and your enviable academic records has made a comrade of you. This is no doubt the reason we chose to bestow on you AYC golden award as a distinguished AYC role model of the year 2013,” Rasheed said.
He added that “as a respected and dedicated Ondo State indigene you have gone beyond the ordinary to capture the essence of vision, hard work, accountability and integrity”.

Aremo who said he is humbled by his choice for the award, coming a few months after he assumed office as Secretary to the EFCC, thanked the group for the rare honour. He advised members of the association to be hard working and positive role model for their peers and the younger generation.
He assured the group that he would continue to contribute his quota to the development of Akoko land and the Nigerian state.

READ  PDP Flags Off Campaign Ahead Of Zamfara Bye Election

As real tame leopards in dolisie