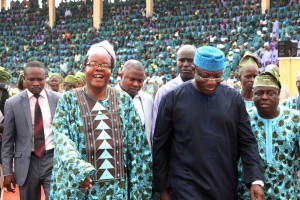 Cooperative activities in Ekiti State at the weekend received a boost as the State Governor , Dr Kayode Fayemi, announced the approval of N600 million as empowerment funds to improve the lending capacity of  Cooperative Societies in the state.

The fund which is equally contributed by the state government and the Bank of Agriculture at N300 million each, is a result of the partnership between the duo to empower and strengthen the cooperative societies in the state and improve the living standards of the people who are involved in cooperative activities.

Speaking at the first Ekiti State Cooperative Day held at the Oluyemi Kayode Stadium, Ado-Ekiti on Saturday, Governor Fayemi noted that available data ranks cooperatives as the second employer of labour and second in the provision of economic activities apart from the state government.

He added that the organization is expected to have expanded to other areas of economic activities such as the establishment of cottage industries in cluster communities where raw materials are available.

While stating that employment generation is one of the ways of reducing poverty, the Governor assured that government would continue to support and create conducive environment for the establishment of micro industries in the State.

Dr Fayemi said that his administration had approved the constitution of a nine- man State Cooperative Advisory Board aimed at working on the formulation of cooperatives policy of the State as well as advise  government on the improvement of the Society in the State.

He highlighted some of the steps taken by his administration to improve on community development and empowerment to include the disbursement of N602 million as grant-in-aids to communities in the first and second phases of the scheme which helps communities actualize their self-help projects.

In his remarks, the Commissioner for Rural Development and Community Empowerment, Chief Folorunso Olabode, stated  that the fund would go a long way to enhance the lending capacity of the cooperative societies and uplift the socio economic activities of cooperators in the state.

The Commissioner who urged members of the cooperative societies to invest the fund in viable businesses in order to repay the loan in accordance with the terms that guide the disbursement of the fund, reminded them that the revitalization fund is a commonwealth of Ekiti people.

Olabode added that the event is therefore aimed at raising public awareness on how cooperatives can contribute to poverty reduction, employment generation and social integration.

Also speaking, the Chairman of the State Cooperatives Advisory  Board, Chief Clement Ayoola, expressed joy that government has aided the cooperatives societies by helping shore up their capital, saying that the gesture was a fruit of a meeting of the Association with the governor in June this year.

He added that the gesture would go a long way in helping create more employment opportunities for the teeming unemployed population, banish poverty from the State and develop the society.

Pulisic Is A Top-Class Player – Lampard