A renowned human rights activist, Comrade Adeniyi Alimi Sulaiman, who backs the #EndSARS protest, has strongly condemned the penultimate Saturday violent attack on the life of Osun State Governor, Alhaji Isiaka Gboyega Oyetola, thanking God for saving the life of the Governor during the violent attack, urging the Governor to ensure that the government fish out those thugs that earlier attacked the peaceful protesters before Saturday violent.

He described both violent attacks on Governor Oyetola and protesters as barbaric and primitive, saying that the attack was the handiwork of hoodlums that used the opportunity of peaceful EndSARS protest to perpetrate evils by also looting some stores at Osun Mall earlier before the violent attack on Oyetola and his entourage to the scene of the protest.

Comrade Sulaiman who declared his total support to the protest against the Police brutality and extra-judicial killings of the men of Special Anti-Robbery Squad (SARS), stating that men of disbanded SARS had wreaked havoc to the innocent citizens of the Country than good, calling on the government to listen to the cry of the masses on the total end of SARS instead of changing of the name to SWAT, adding that the government should embark on a total reform of the Nigeria Police Force (NPF) following democratic principles.

This was contained in a signed personal statement by Comrade Sulaiman, which copies were made available to newsmen on Tuesday, he condoned with the families of the two persons that lost their lives on the faithful Saturday in different two locations in the State capital in connection with the protest but not connected to the violent attack on Governor Oyetola, praying to God to give the State and families of deceased the fortitude to bear the irreparable loss.

The rights activist also called on the State Government to fish out the earlier attackers of the EndSARS peaceful protesters at Olaiya junction, few days to the violent attack on the Governor, saying that as the State was looking for the hoodlums that attack the Governor at the scene of the protest, they should not forget the attackers of the protesters too no matter whose ox is gored.

While sympathizing with the good people and government of Osun State, Sulaiman urged the Coordinator of the peaceful protest of EndSARS in the State, not to allow the hoodlums and people with an ulterior motive to hijack the peaceful protest from them and the protesters should be ready to dialogue with the government to pressure for their home demands for betterment of our society.

Sulaiman who is Executive Chairman, Centre for Human Rights and Social Justice (CHRSJ), advised the State government not to restrict the mandate of Judicial Panel of Inquiry to be set up to investigate all the police brutality and extra-judicial killings of the disbanded Special Anti-Robbery Squad (SARS), stressing that the officers and men of the disbanded Special Anti-Robbery Squad (SARS) had inflicted more injuries to the people of the State and Nigeria as a whole.

It would be recalled that on Saturday, Governor Oyetola who was on a solidarity visit to the venue of the protest at Popular Olaiya junction, Osogbo, was violently attacked by some hoodlums before Governor Oyetola was narrowly escaped at the scene. 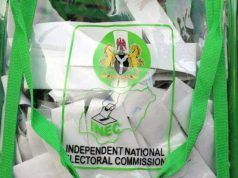 A Good Loan Is A Loan To Play – Jose Mourinho

PDP Admits Buhari Is Not Corrupt

Nigerians Must Fight Corruption Too – ICPC