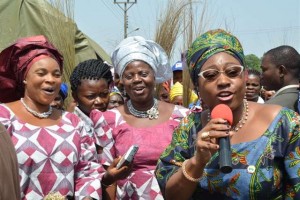 Wife of Ekiti State Governor, Erelu Bisi Fayemi, has urged members of other political parties to have a rethink and team up with the All Progressives Congress to take the country to the promise land.

As a starter, she wants members of the opposition parties to take advantage of the ongoing nationwide membership registration of the APC to dump their parties for the progressives.

The governor’s wife said this shortly after registering as a member of the APC at Ilafon Ward, Isan-Ekiti, on Thursday.

She was in company with women in politics, led by the APC State Women Leader, Mrs. Funke Owoseni, to monitor the progress of the exercise in some units in the community.

Expressing satisfaction with the turnout of party faithful for the exercise, she said the enthusiasm with which the registration was embraced indicated the wide acceptance of the APC.

She said, “The registration of APC members has been overwhelming. People have turned out in very large numbers. In some of the polling units I visited, they have actually run out of registration booklets.

“This is a sign that our party, the APC is very widely accepted and people are joining in huge numbers. They are delighted to be members and we know that this is a party to beat both at the state and national levels.

“I’ll have to urge other people out there and those who belong to other parties to have a rethink and come out and register and join our great party. The APC is the only party that brings change in this country.”

She assured new members that the APC would ensure a level playing ground for all party members.

Tinubu Should Not Direct His Anger At Me – John Oyegun