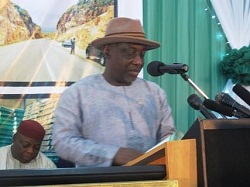 (Interior Ministry Reports) “The Nigerian Government is committed to building a virile nation for the future of the youths and any effort  by the young generation to fight the ills of the society will be effectively encouraged in its entirety as fighting for a better tomorrow behooves the youth,” the Minister of Interior, Patrick Abba Moro told a delegation of Commonwealth Students/Youths Federation for Peace recently.

Patrick Abba Moro said this during the conferment on him of the “Imperial Peace Ambassador” award in his office in Abuja to mark the start of the association’s sensitization campaign against drug abuse.

According to him, part of the Transformation Agenda of President Goodluck Jonathan is the fight against drug abuse and addiction which is responsible for the empowerment and strengthening of NAFDAC and NDLEA to ensure that Nigeria and its youths are free from drug abuse. He referred to the association’s campaign as a continuation of the current Administration’s Agenda.

Speaking further, the Minister expressed delight for the joint efforts between youths in sister countries like Rwanda and Ghana towards combating some of the societal ills in the continent. He also acknowledged that though Nigeria is currently facing a lot of political and internal security challenges, the country has the capacity to overcome all odds and become the fastest growing economy in Africa as well as translate its economic growth to the mutual benefit of Nigeria.

“The indications of societal decay as seen in the danger of drug abuse and addiction must be totally eradicated for the creation and growth of a virile nation,” he revamped.

Speaking earlier, the President of the Association, Oyewoga Billikis from Nigeria said that the choice of Abba Moro as the Peace Ambassador is based on his detribalized personality, whose love for students and youths is clearly evident. He added that his ebullient and vivacious nature, administrative acumen and sagacity has driven the wheel of the great Ministry of Interior to tremendous successes.

In his opening remarks, the Secretary of the Association, a Rwandan affirmed the Association’s choice as seen in the extensive and uncommon achievements of the Minister within Nigeria and across Africa.  He described the efficient tackling of security challenges through the agencies under his watch as a sterling example of his dedication and commitment to duty in ensuring the security of the country.

The Number Of People Tracing Coronavirus Cases In Nigeria Must Increase...

Those Who Stole Nigeria’s Cash Are Very Powerful – Lai Mohammed