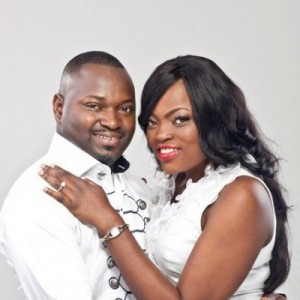 The couple showed off their skills as they danced to Shina Peters music at the 2nd premiere of her movie, “Jenifa in London” at the Lighthouse hall in London on Sunday, November 6, 2016.

The lovebirds who whisked themselves away for a private wedding back in August, also detailed their arrival in London on Snapchat.

Funke Akindele Bello’s screening was attended by the legendary Sir Shina Peters, who later took to the stage for a surprise performance. JJC was also present to support his wife as she premiered the hilarious sitcom.

A new sitcom from Akindele aka Jenifa, “Jenifa in London” continues the exploits of Jenifa and Adaku, as the two travel to London in search of greener pastures. It follows the trouble that comes with being an illegal immigrant.

Funke Akindele separated from ex-husband, Kehinde Almaroof in 2013 while JJC has 3 children from three women.

Chelsea Have Improved Since I Left – David Luiz

It Is Hard To Find To Squeeze Local Players Into My...