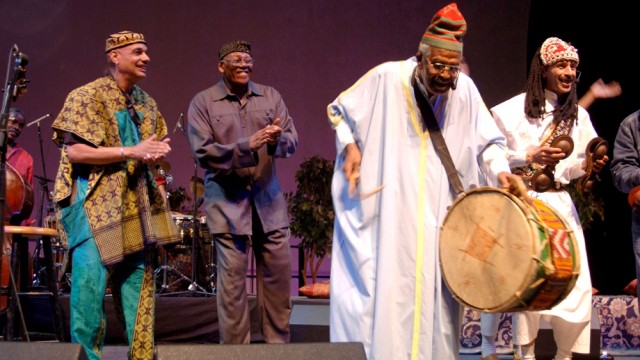 Gnawa is the music of formerly enslaved Black Africans who integrated into the Moroccan cultural and social landscape, and founded a model to preserve the traditions and folkloric music of their ancestors.

Rising to prominence from a marginalised practice to heal people possessed by genie spirits, it is one of the most popular styles of North African music, which not only attracted fans worldwide, but also interested famous European and American musicians such as Randy Weston, Bill Laswell, and Robert Plant.

Gnawa reflects the impact of black African culture on Moroccans. The African touch is clearly reflected in the dances and the garments the singers wear.

The roots of the music are recognisably African in the drumming, the unique metallic castanets, the three-stringed bass lute (guembri), as well as the mosaic gowns and caps worn by musicians mostly decorated with cowry shells.

“This music is a part of ancient and rich African heritage, which has been growing and prospering for centuries as a thriving music project in Morocco. It is a fascinating combination of poetry, music and dancing. Its secret also lies in its religious, spiritual dimension, which gives it a kind of therapeutic power,” said Anass Fassi Fehri, Professor Assistant at Fez Sidi Mohamed Ben Abdellah University.

It is said that the name Gnawa originated from the word Guinea, a place known for its slave trade during the 11th century.

The music is found mainly in communities with large populations of ethnic Africans and is not connected with the elite. Gnawa bands come mainly from the cities of Marrakech and Essaouira, which are historically known for slave trade with trans-Saharan countries.

The components of Gnawa songs and dances incorporate references to the singers’ origins and enslavement, as well as displacement and misery.

Not just a set of a series of rhythms, Gnawa is a music which, according to academic and researcher Fouzia Baddouri, takes one back to the remote past where poor black slaves sang their misery and daily worries.

As Okot p’Bitek describes in his book, Song of Ocol & Song of Lawino, the African primitive songs and dances are not just entertainment. They also establish links between members of the community, both who are alive, and those who have passed away.

And the similarities between Gnawa, jazz and Blues in the US have seen the folkish genre travel internationally. African Americans share an element of a painful African history: slavery.

Through each of those types of music, singers try to return to their African roots and identity. By committing themselves to Gnawa music, African Americans, for example, are establishing a historical and cultural link with their forefathers.

The music has become so popular that it prompted the Moroccan government to organise a yearly festival in the southern coastal city of Essaouira, featuring Gnawa as part of the country’s cultural heritage that forms an important part of the kingdom’s oral literature.

The three-day musical event is held every May or June and features a host of Gnawa masters along with jazz, fusion, Blues and contemporary world artists.

Gnawa Muallems (Masters) pride themselves on being able to keep the audience hooked, fascinated and moved through a distinctive spiritual practice that turns noise into melody.

“The fact that the main musical instruments are the drums and ”ganbri” is very significant because they symbolise and reflect the beating of the dancers’ hearts,” Baddouri said.

For many, Gnawa is enchanting in a way that only spiritual music can be. It uses drums as the main background and relies on refrains that take one into a swirling movement. The regular loud rhythm of drums leaves a hypnotising effect on some people.

For others, the music is a mark of distinctiveness that tends to be monotonous and repetitive, but has its own charm that sends everyone into rapturous spasms.

I Am Still Friends With Petr Cech – Thibaut Courtois

Readout of the President's Call with President Jacob Zuma of South...