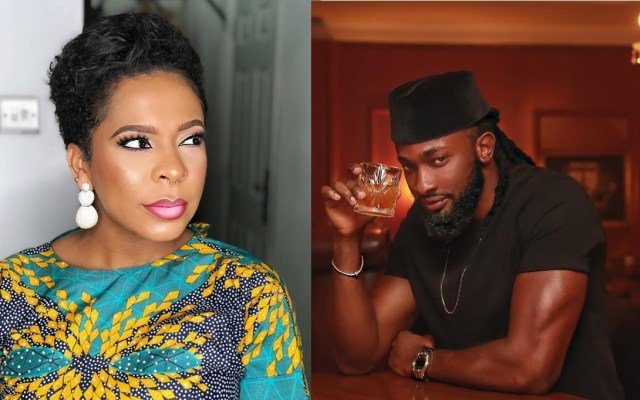 Popular presenter, Uti Nwachukwu who has been rumoured to be TBoss’ baby daddy has shared his reaction to the birth of her baby.

He jumped on Instagram to share a throwback baby bump photo of the new mum with these words, “Cheiiii😍😍😍 even in Pregnancy Just Look at this epitome of Beauty 😍😍😍 YOUR FAV COULD NEVER!!! congratulations to the First Queen @officialtboss_ 👏🏾👏🏾👏🏾 May the Lord bless you and this Child abundantly.”

The former BBNaija housemate, TBoss kept denying the reports that she was expecting even after been spotted at a diagnostic centre where she went for a test.

But recently, she shared her reason for doing that.

Her words, “My silence was just that: Silence- until I was ready to speak about it.”

Congratz to her but Uti really the father? Let us know what you think.

Uti is the 25-year-old representative from Nigeria in Big Brother Africa 3. He became the third evictee of Big Brother Africa 3 house on 5 October 2008 (Day 42). During his stay Uti was known for often teasing his fellow housemates (mostly Mimi and Thami). During Namibian housemate Lucille’s eviction Uti had a violent out burst upon learning that she had been evicted.

In 2010 Uti competed as a contestant in Big Brother Africa 5: All-Stars in which he lasted 91 days and ultimately won by defeating Munya is a final vote of 8 to 7. He has spent a combined total of 133 days in the Big Brother house. He is a native of Ndokwa from Aboh Kingdom in Ndokwa-East Local Government Area of Delta State Nigeria.

Uti began his acting career 2011. And had so far featured in several movies since then.

Barcelona Is Not The Barcelona Of Old – Koeman

My Photoshoots Are Interesting And Diverse – Azealia Banks