Home Sports I Have As Much Enthusiasm For Leaving Madrid As I Do For...
Facebook
Twitter
WhatsApp
Email
Telegram 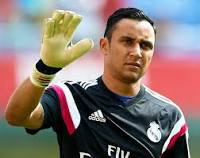 “I have as much enthusiasm for leaving Madrid as I do for dying,” Keylor Navas said after his side’s friendly victory over Roma on Tuesday in response to the arrival of Thibaut Courtois at the Bernabeu.

It was an uncharacteristic choice of words by Navas, and spoken by a devout Christian was as emphatic a phrase as the Costa Rica keeper has ever uttered in a Madrid shirt. Navas’ immediate existence might have hit a snag but his response to the challenge has been crystallising for several years. Its jagged edge made the inference perfectly clear: from here, the 31-year-old is looking out for No. 1.

Three Champions League crowns and a Liga title is a decent haul for any keeper over an entire career. Had Gianluigi Buffon managed that in just three years he would have been made pope. Navas, despite his successes, has never enjoyed the black-and-white legendary status of the Italy great or even the same hallowed reverence reserved for Iker Casillas.

Navas was signed in 2014 after an eye-catching World Cup with Madrid’s No. 1 shirt up for grabs. The relationship between Casillas and Florentino Perez had reached a breaking point and Diego Lopez had been entrusted with the gloves in the league the previous season with the club captain reduced to cup competitions. Carlo Ancelotti settled on Casillas as his starter for 2014-15, a reward for leading the side to the Decima. Navas made just 11 appearances in his debut year.

The following summer, Casillas was ushered out the back door, paving the way for Navas, who started in style by breaking a clean-sheet record. He has not faced a challenge to his status since; Kiko Casilla has been more than happy to warm the bench and watch the medals roll in. That is about to change. A good number of Madrid fans voiced their displeasure on social media after Courtois was announced, a gif of Leo Messi nutmegging the then-Chelsea stopper a popular retort.

After the David de Gea debacle, which left a tearful Navas stranded in a waiting room at Madrid’s Barajas airport, Perez took no chances this time even if the outcome was never in doubt: Courtois wanted a return to Madrid to be closer to his children, Chelsea did not want to lose him on a free next summer and Lopetegui will be instructed to make it work.

Whether it is a logical transfer is irrelevant. Denied the opportunity to sign a Galactico in attack, Courtois was the closest Perez could get. That he landed the World Cup Golden Glove winner for €39 million while forcing Chelsea into the €80m purchase of Kepa Arrizabalaga will have provided a note of grim satisfaction. El Presi almost bagged the former Athletic stopper in January for a quarter of that fee but was vetoed by Zinedine Zidane, who did not want to disrupt squad harmony halfway through the season and backed Navas to the hilt throughout his tenure.

Many observers believe the Kepa impasse was the beginning of the end for Zidane. The irony of losing the second-most successful coach in Madrid’s history — which in turn played a part in the club’s all-time top scorer jumping ship to Juventus — over a goalkeeper is probably lost on Perez. He faced calls for his resignation over his treatment of Casillas and his feathers are unlikely to be ruffled by any backlash from Navas’ supporters. Football is a business and Perez a businessman. He will simply point to the numbers.

With keepers suddenly commanding prices previously reserved for forwards, they do not make bad reading. Andriy Lunin’s initial €8.5m fee takes Real’s spending on stoppers to €47.5m this summer. Add in the €10m fee paid to Levante for Navas and Real have still not matched the money paid by Liverpool for Alisson yet now possess two world-class keepers and a highly rated 19-year-old full international after a pre-emptive move similar to Chelsea’s for Courtois in 2011.

Philippines' debt must be cancelled to support typhoon recovery effort –...

Buhari Will Lose In 2019 – Balarabe Musa