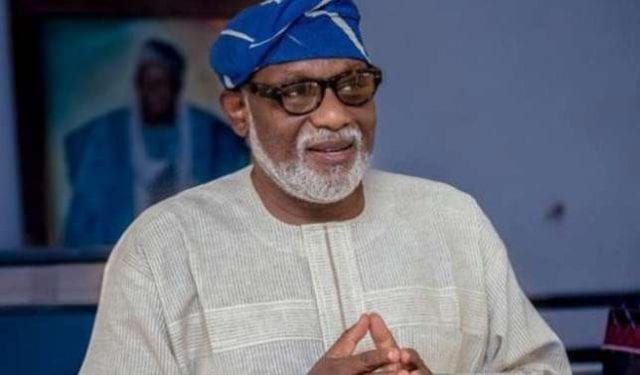 Governor Rotimi Akeredolu of Ondo State, on Friday, has vowed to give proper support to South African returnees of Ondo origin so that they can start new lives.

Gov Rotimi, who received the returnees in his office, also gave them N100,000 cash each for resettlement activities in their several communities.

Represented by his deputy, Agboola Ajayi, Akeredolu blasted the xenophobic attacks on Nigerians living in South Africa by the indegenes.

His words, “We also have various windows of opportunities, including youths and women empowerment as well as agricultural and entrepreneurship programmes, among several others.

“Therefore, avail yourselves with any of them to better your lives.”

Do you think this is wise?

Oluwarotimi Odunayo Akeredolu, SAN, or Rotimi Akeredolu, (born 21 July 1956) is a Nigerian politician and lawyer who is also the Governor of Ondo State, Nigeria and also a Senior Advocate of Nigeria (SAN) who became president of the Nigerian Bar Association in 2008. Akeredolu was also a Managing Partner at the Law Firm of Olujinmi & Akeredolu, a Law Firm he co-founded with Chief Akin Olujinmi, a former Attorney General and Minister for Justice in Nigeria.

Akeredolu was born on 21 July 1956 in Owo to Reverend J. Ola Akeredolu of the Akeredolu family and Lady Evangelist Grace B. Akeredolu of Aderoyiju family of Igbotu, Ese Odo, in Ondo State. Akeredolu started his primary education at Government School, Owo. He proceeded to Aquinas College, Akure, Loyola College, Ibadan and Comprehensive High School, Ayetoro, for his secondary school education and Higher School Certificate, respectively. His middle name “Odunayo” means “Year of happiness” in Yoruba He went on to the University of Ife (now Obafemi Awolowo University) to study Law, graduating in 1977. He was called to the Nigerian Bar 1978.

Akeredolu was appointed Attorney General of Ondo State from 1997–1999. In 1998 he became a Senior Advocate of Nigeria. He was Chairman of the Legal Aid Council (2005–2006). In November 2009 he faced allegations of corruption when the Bar Association’s Third Vice-President, Welfare Secretary and Assistant Financial Secretary circulated a petition entitled “Complaints against your fraudulent manifestations, violation of the NBA”. Subsequently, the allegations against him were reviewed and dropped by the National Executive council of the Nigerian Bar Association.

In a lecture in December 2009, Akeredolu said no amount of electoral reform or judicial system could give Nigeria free and fair elections, if Nigerians themselves refused to take practical steps to ensure that their votes count. Later that month he stated that Umaru Yar’Adua, the President of Nigeria should have handed over to Vice-President Goodluck Jonathan in an acting capacity during his illness, a statement that was backed up by the Nigerian Bar Association who said he was authorised to speak on their behalf.

In 2012, the Nigerian Bar Association named its new secretariat in Abuja after him with its president citing the reason being the need for “generational identification and recognition of those who had contributed immensely to the development of the association.Everything in the NBA is usually highly politicised. The sheer courage for him (Akeredolu) to go through the rigour is a testimony to his selfless service.”

I Got Into Messi’s Mind – Hannes Halldorsson