I Will Run For Presidency If Trump Wins – Basketmouth 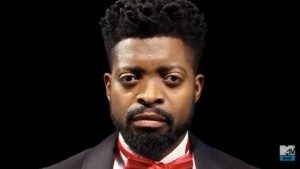 Stand-up comedian, Basketmouth has declared that he will run for the 2019 General Elections if US Republican candidate, Donald Trump wins presidency.

Trump is running against Democratic Party candidate, Hilary Clinton who is looking like the favourite to win the race.

“If Donald Trump wins the US election, I’m so running for the Presidential election in Nigeria 2019”.

In an interview with The Cable News, Basketmouth took time to comment on Nigeria’s last presidential election which was won by Muhammadu Buhari.

He criticized Buhari’s predecessor, President Goodluck Jonathan, whose administration was dominated by allegations of corruption.

The comic was not shy to admit who he was rooting for in the last election.

“While many of my colleagues, friends and family members campaigned for the PDP, APC and various candidates during the last elections (and I cannot emphasize enough that it is their right to do so), I never campaigned for Buhari or any other politician.

“Indeed, I personally hoped that he would win the election and perhaps that was evident in my body language and I am happy he won. But I did not campaign for him.

“Nigeria was in a bad place by the end of the last administration and it was only a matter of time before we would have suffered the plights of Brazil and Venezuela.

“Truth of the matter is that I would have voted anyone that could speak 2 words of English against GEJ and that’s strictly based on the amount of greed and selfishness we witnessed from members of his administration in the 6 years that he sat on the rock.

“They put us in this septic tank we are in right now…. well, that and the oil price downfall among other things.”

Under new president, Muhammadu Buhari, Nigerian has a new sense of hope though his administration hasn’t been without some drama.

I Am Proud To Have Represented Manchester United – Mourinho