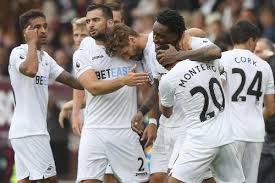 Swansea midfielder Gylfi Sigurdsson is happy at the Premier League club and is not looking to leave unless the Welsh side want to sell him.

Sigurdsson’s nine goals and 13 assists have been crucial for Swansea’s survival in the top-flight this season, and the Iceland international won the club’s Player of the Year award for the second consecutive season on Wednesday.

The 27-year-old signed a new contract in August to keep him at Swansea until 2020, but media reports have linked him with league rivals Everton and West Ham United in recent weeks.

“I signed a new contract in the summer and I’ve got three years left,” Sigurdsson told British media.

“So it’s down to the club if they want to sell me. But I was very happy when I was on loan here and then again in the last three years.

“I’m not trying to leave, I’m not desperate to go or anything. It (speculation) doesn’t bother me what people are talking about.”

Swansea secured safety with a 2-0 win over relegated Sunderland last Saturday and will host West Bromwich Albion on Sunday.

The Top Call Center Software Provider of 2014, Ranked by New...