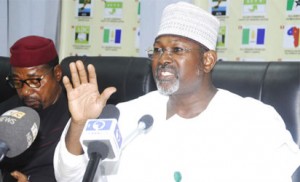 Speculations have become rife that the electoral body has concluded plans to postpone the polls until March, with an AP  reporter saying the shift was aimed at enabling the multinational joint task force finish retaking territories occupied by terrorist group Boko Haram.

However, INEC in a Twitter post dismissed the speculations. “INEC has not made any official announcement about Feb. 14th polls. Meetings still ongoing #Nigeriadecides,” the post read.

The commission is expected to announce its decision on Saturday evening after meeting with representatives of the political parties.

There had been calls for election dates to be shifted due to the inability of INEC to complete the distribution of Permanent Voters’ Cards (PVCs) and also for security reasons.

While the meeting of the Council of State was believed to have ended with the former leaders encouraging INEC to go on as planned. But online news platform, TheCable quoted a senior official of the commission as saying that the election would be a “monumental chaos” if it goes ahead next week as planned because of serious technical, security and logistical hitches.

If INEC postpones the elections, supporters of the major opposition party in the country, the All Progressives Congress (APC), which has been vehemently opposed to any shift in the dates, may embark on massive protests.

Supporters of Muhammadu Buhari, presidential candidate of the APC are of the opinion that a shift in the polls was intended to buy time for President Goodluck Jonathan, candidate of the Peoples Democratic Party (PDP), and slow down the momentum of the opposition.

READ  Lekki Shooting: Only Lagos Government Can Invite Us — Army

Nigerians have reported heavy presence of military in major cities in the country. Comments on social media allege that the FG had deployed troops as a preemptive measure.

BBNaija Set To Start On The 30th Of June

Etisalat Celebrates Winners Of The 2014 Pan-African Prize For Innovation

Invest in the people of Somalia, says ASG Cheng-Hopkins as she...