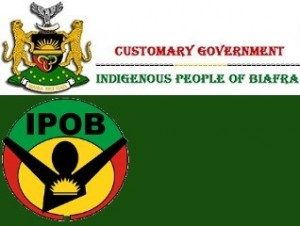 The Independent People of Biafra (IPOB) has called on its supporters to sit at home on May 30, 2017.

IPOB says that day will be set aside to honour all Igbos who have been killed in sectarian violence from 1945 till now.

According to Punch, IPOB’s spokesman, Emma Powerful on Saturday, April 1, 2017, said services will be held to pray for the dead.

Powerful also said “The Indigenous People of Biafra and its leadership worldwide would like to use this opportunity to inform Biafrans, friends of Biafra, and lovers of freedom all over the world, to prepare for the historic annual Biafra Day of Remembrance 2017.

See also  Nigeria Had The Freest, Fairest And Most Peaceful Election In 1993 - Mudashiru Obasa

“Our heroes and heroines of the class of 1967-1970, who paid the ultimate price in defence of the dignity of the black race during this genocidal war against the people of Biafra, will be remembered and honoured in the finest traditions of IPOB.

“This annual event for 2017 has been designated a day of prayer, fasting, supplication and introspection.

“Also, all victims of state-sponsored genocide, from the Jos massacre of Biafran people in 1945 to the most recent Asaba massacre in 2017 at an IPOB meeting by the Nigerian Army, will all be honoured.”

Chief Ralph Uwazuruike, leader of the Biafra Independent Movement and Founder of the Movement for the Actualization of the Sovereign State of Biafra (MASSOB) recently described IPOB members as fraudsters.