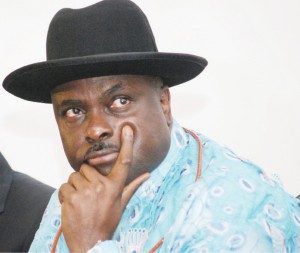 After some hours in the custody of the Department of State Services, ex-governor James Ibori, has arrived his hometown in Oghara, Delta State.

According to a report by TheCable, Ibori arrived Oghara in Ethiope East local government area of Delta state in the evening of Saturday, February 4, 2017 many hours after his return to Nigeria.

Ibori reportedly left the DSS headquarters in Abuja after holding a meeting with Lawal Daura, director-general of service.

It was also reported that a mammoth crowd had earlier converged on the Osubi Airport, near Warri to receive the Delta state former governor but he landed at Benin airport in Edo state before proceeding to Oghara.

“Security was very tight. In fact his arrival took us unaware. Nobody could move close to him, as he was surrounded by his security aides,” a source reportedly said.

A source at the Benin airport said Ibori arrived at the place in a chartered flight, and did not waste time before embarking on the journey to Delta.