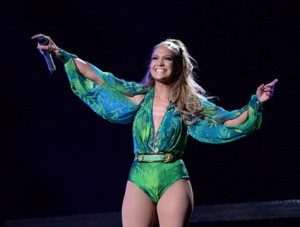 Jennifer Lopez and Alex Rodriguez are ready to live it up in the Dominican Republic.

Fans were more than excited to see the Shades of Blue star arrive at La Romana International Airport Thursday evening with her twins.

Wearing a pair of $1,295 Giuseppe heels and a $54 tank dress from Naked Wardrobe, the singer’s look definitely turned a few heads.

But as it turns out, a few more familiar faces were getting ready to show up in the Dominican Republic for a very special trip.

E! News can confirm Alex also arrived for the weekend getaway. And from the looks of it, the former New York Yankees player will be able to attend Jennifer’s show Saturday night.

Described as her first concert in the Dominican Republic, J.Lo is set to perform at the historic Altos de Chavón Caso de Campo.

In rehearsal footage posted onto Instagram, it appears Marc Anthony may just make a special appearance during the show. In fact, the duo appeared to be singing their song “Olvídame y Pega La Vuelta.”

Putting concerts aside, E! News has also learned that Jennifer is set to stay at the Casa de Campo Resort & Villas for 10 days.

According to a source, the private oceanfront villa features six magnificent bedrooms, a modern art collection and a state-of-the-art kitchen. It opens to a long, elegant pool and gazebo, displaying breathtaking views of the Caribbean Sea.