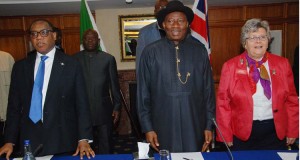 President Goodluck Jonathan is going to London to preside over a meeting of Nigeria’s Honorary International Investment Council (HIIC) which opens on Friday.

According to a statement by the special Adviser to the President on Media and Publicity, Dr Reuben Abati, which disclosed that Jonathan will leave Nigeria for the British capital on Thursday, deliberations at the meeting will focus on the current investment landscape in Nigeria, developments and opportunities in the ongoing upgrade and expansion of Nigeria’s public infrastructure, as well as opportunities and reforms in Nigeria’s rail transportation, power and construction sectors.

Also expected at the meeting are the Coordinator of the HIIC, Baroness Lynda Chalker and other key members of the Council including Haruki Hayashi of the Mitsubishi Corporation, Yves Louis Darricarrere of Total, Andy Brown of Shell, Guillame Roux of Larfarge, Alhaji Aliko Dangote, Mr. Jim Ovia, Alhaji Umaru Mutallab, some state governors and the Chairmen of the National Assembly Committees on Transport.

Assistant Manager – Oil and Gas Job at a leading Insurance...